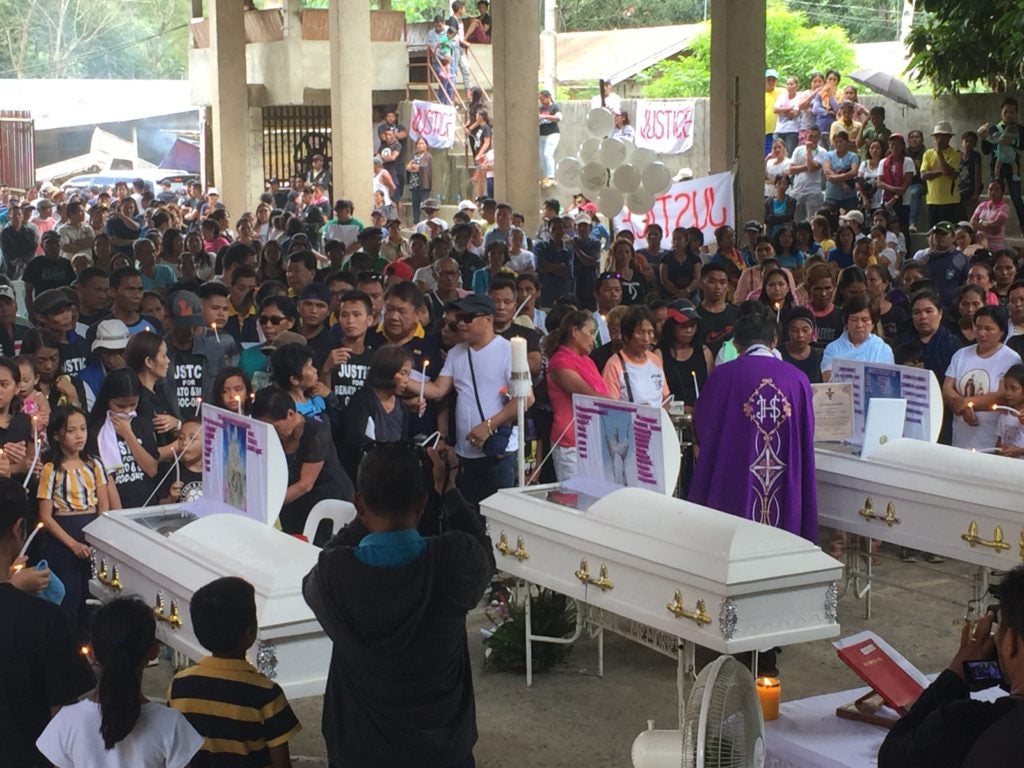 Requiem mass for the barangay tanods and the tanod’s wife who died in a shootout with the police on February 22. | Delta Dyrecka Letigio

CEBU CITY, Philippines–The families of Barangay Lusaran tanods (village watchmen) Reynaldo Laguna and Renato Goc-ong and Renato’s wife Emma, who were killed in a police shootout in February, called for justice as the three were laid to rest on Sunday, March 3.

The daughter of Renato and Emma, Reina Mae Goc-ong, sought for the justice for her parents’ death, which she described as an inhumane and a cruel act by the police.

The couple’s older daughter could not contain her tears when she spoke about the last night she spent with her parents whom she said were very happy before their death.

When the incident happened, Reina Mae and her siblings hid, as  the shootout  took place outside the Goc-ong’s house .

Between sobs, Reina Marie apologised to her parents for not being able to do anything to save them.

Her younger teenaged brother, Renato Jr., also could also not contain his anger for the way his parents died.

He said that his parents have always been loving and supportive despite the challenge of making both ends meet.

As for his mother, Renato Jr. recalled that she would patiently prepare her produce early in the morning to sell them at the market while also preparing food for the family.

Renato Jr. said they lived a simple life and that life was destroyed when the police barged into their home on that day they lost both their parents.

Meanwhile, the family of Laguna remained silent during the Requiem Mass and refused to answer questions from the media.

On February 22, Laguna and the Goc-ong couple were killed in separate gunbattles during the police operation to search for loose firearms against the barangay tanods and a barangay official of Barangay Lusaran.

Police Colonel Royina Garma, the director of the Cebu City Police Office (CCPO), earlier said that the shootout started when Renato fired at and wounded PO3 Pachedo Pulgo, a member of the Cebu City Mobile Force Company (CMFC), the unit serving the search warrants in the area.

Pulgo led his team to enter Goc-ong’s house after the wife closed and locked their door instead of letting the police inside and was shot by Renato. The other police officers then fired at Renato.

During the shootout, Renato’s wife was killed after she tried to shield her husband with her body from the police officers who were firing back at Renato when he shot PO3 Pulgo.

While the shootout with Goc-ong happened, another team of police officers also served a search warrant on Laguna at his house but were allegedly fired upon instead by Laguna.

The police officers fired back and killed Laguna in the ensuing gunbattle.

During Friday’s operation, police also arrested the village chief of Lusaran, Agustin Partulan, after a search in his house yielded unlicensed firearms./elb

Read Next
PAST FORWARD: Murio-Murio, T. Padilla and the Fires of March