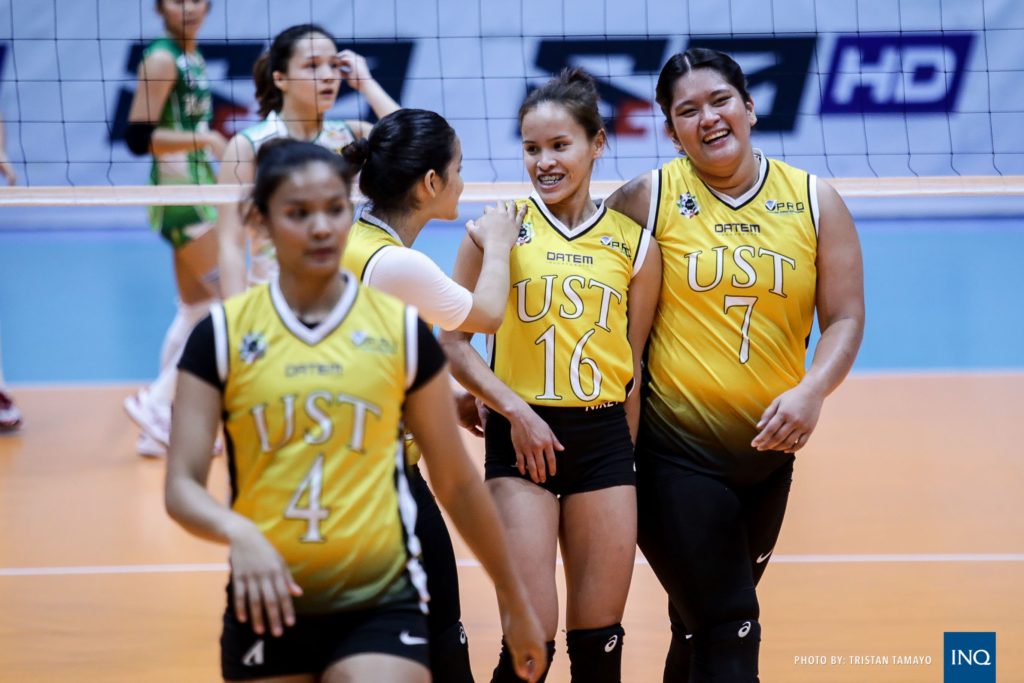 Cebuana Cherry Rondina celebrates with her UST teammates in a game against La Salle on Wednesday. | Inquirer.net

MANILA, Philippines — Cherry Rondina has always played with a nuclear intensity, but she’s learned that she has to dial it down a bit for the benefit of her younger teammates.

Rondina thought it was best to tone her intensity down for a bit ahead of UST’s showdown with defending champion De La Salle.

The Cebuana Rondina said that her sometimes volatile expression scares her teammates, so she knew she had to take it down a notch and that change paid dividends for the Golden Tigresses, who lambasted the Lady Spikers, 25-20, 25-22, 25-17 on Wednesday, March 6, 2019.

“The way I play is really intense but they get a bit scared when I do that,” said the Compostela, Cebu native Rondina in Filipino on Wednesday at Filoil Flying V Centre. “So during the game I went for a different approach and what I did was console them and just remind them that it’s okay to make mistakes because we can still get it back.”

“What I did was relax myself before comforting them because during games when I’m in the backline I myself freeze so I relaxed myself before talking to them.”

The other reason why Rondina had to be a bit calmer is the absence of Season 80 Rookie of the Year Milena Alessandrini, who is sidelined with a knee injury.

Rondina and all the other Golden Tigresses sported hair buns in support of Alessandrini who’s recovering at UST Hospital.

“These buns are for Amiga,” said Rondina.

The 22-year-old Rondina finished with a game-high 19 points, including two late ones that helped seal the win for the Golden Tigresses, who are now tied with La Salle and Far Eastern University for the third spot in the standings.