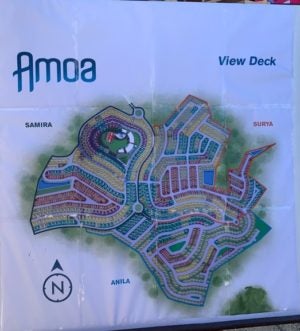 Their first model unit of Amoa, Ananda, is a single-story unit which includes a living room, dining room bathroom, and two bedrooms.

Out of seven enclaves, Amoa has opened three phases that feature 1,250 units, 900 of which are already sold. Out of the 900 units, 200 units will be soon turned over soon.

Their target buyers, said Mayol, are the middle market range who are city dwellers and want a space of their own.

Mayol admitted that the trend among developers is to sell condominium units.

However, there are still a number of people who prefer a house-and-lot development since they want space for their children to roam around safely.

The development is two kilometers away from the beach. Over 40 percent of the property is dedicated to open space.