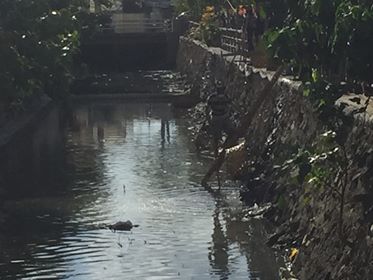 Lahug River in Cebu City, considered to be ‘biologically dead,’ is filled with all kinds of wastes in this photo taken early in the morning of March 9, 2019,  minutes before the massive cleanup drive initiated Cebu City Environment Office where around 10 tons of garbage were collected. |CDND Photo/Delta Dyrecka Letigio

CEBU CITY, Philippines–The Cebu City Environment Office (Cenro) plans to ask City Hall to purchase septic tanks that can be placed  in the residential areas near the Lahug River where there are no septage facilities

Cenro Head Nida Cabrera said  the cleanup drive in Lahug River on Saturday morning, March 9,  was found to be challenging because of the strong foul smell that emanated from the river, which forced volunteers to cover their mouths and noses with masks.

Cabrera attributed the smell to the human and animal wastes, along with other garbage, thrown into the river by the residents and establishments along the river’s banks. 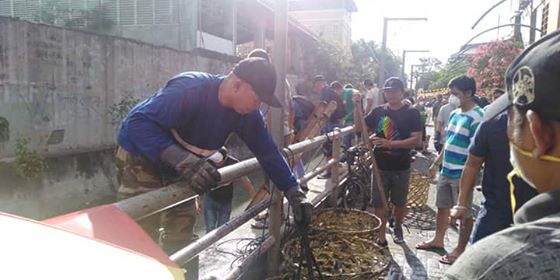 Some volunteers and workers of the Cebu City Environment Office cover put on masks amid the foul smell that emanated from Lahug River during the massive river cleanup on Saturday, March 9, 2019. At least 100 sacks of trash were collected during the cleanup. |CDND Photo/Delta Dyrecka Letigio

The cleanup generated at sacks of trash estimated to be not less than 10 tons, according to Cabrera.

Cabrera said that during the post-cleanup assessment, they found out that many of the residential areas in Barangay Lahug near the riverbanks of the Lahug River do not have proper septage and they used the river as their toilet.

Cabrera said this practice over the years could be one of the reasons why the Environment Management Bureau in Central Visayas (EMB-7) declared the river biologically dead in January.

With this, Cenro will be proposing to the Mayor Tomas Osmeña to provide septic tanks to these residential areas so their human wastes can be managed.

Aside from the human and animal wastes, Cabrera said that the residents tend to throw their garbage to the river because they couldn’t wait for the garbage trucks to collect their trash.

Cabrera said that responsibility for the collection of the garbage lies with the barangays but the barangays do not have enough garbage trucks. 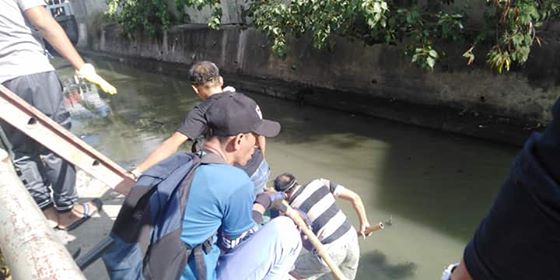 She said Cenro will push for allowing private service collectors to help in the collection of the trash in big barangays like Lahug and Guadalupe, especially since these barangays have rivers as well.

Cenro will also continue to call the attention of violators to discourage people from throwing their garbage anywhere.

“We will continue our education drive to make people understand why we need to stop throwing trash in the rivers,” said Cabrera.

Cabrera estimated that it will take two or three years to rehabilitate the Lahug River and this can happen only if the public cooperates. / elb