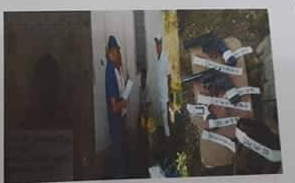 “If they were really my bodyguards, how come wala may nakakita nga nagkiyog na sila sa akoa? (nobody saw them accompany me wherever I go?),” said Esgana in a phone interview with Cebu Daily News Digital.

Esgana claimed the arrest of Marilou Tan Ortega, Dic-se Capacite Arnibal, and Eliso Bula Cabrera for illegal possession of firearms in Barangay Marikaban, Santa Fe town was “nothing but a political ploy.”

“This is politically motivated. These people (who were arrested)? They belong to my enemies in politics. I don’t want to mention names but if you come to Santa Fe, there’s almost zero crime,” said Esgana, who is running for reelection in this year’s midterm polls in May.

Esgana also dismissed reports that he allegedly has a ‘private army’ in Santa Fe, one of the three towns comprising Bantayan Island that is located 132 kilometers northwest of Cebu City.

“If these were really true, then how come we were able to clinch the Peace Diplomacy Award for Law and Order, and other awards and recognition in relation to peace and order? ” he added.

The mayor was referring to the recent recognition received by the local government of Santa Fe from the International Peace Diplomacy Corps Inc.

Armed with search warrants, police from CIDG, the Regional Intelligence Unit (RIU), and the Santa Fe Police Station, arrested the Ortega, Arnibal and Cabrera in Barangay Marikaban in Santa Fe on Saturday.

A search warrant was issued by Judge Jineffer Singco of Branch 79 of the Regional Trial Court Bogo City for illegal possession of firearms against the suspects, who are now detained in CIDG – Cebu City.

Amancia said they also received unofficial reports that one of the suspects, Cabrera, reportedly worked as a bodyguard of Esgana while others were allegedly members of Esgana’s ‘private army’.

“Since 2016, Mayor Esgana has no private army. What you heard is not true. And my brother, he is only a victim of politicking in Santa Fe because our family supports the incumbent mayor,” Bulac said.

“(His arrest) is a product of politicking,” she added.

Read Next
Reshuffling of election officers starts on Wednesday