CEBU CITY, Philippines – The start of the campaign period for the local candidates of the May 2019 elections is only four days away from today, Monday (March 25), and Cebu is now free from any areas with grave concerns in relation to the upcoming elections.

A color-coding system has been implemented by the Comelec to classify the degree of election-related concerns in towns, cities, and provinces all over the country.

Those under the green category are areas with no cause for concerns; yellow for those with a history of election-related violence; and orange for those with the presence of armed and rebel groups.

When all these elements are present in a certain area, then authorities usually place them under the red category, which is also known as a  ‘critical area’. 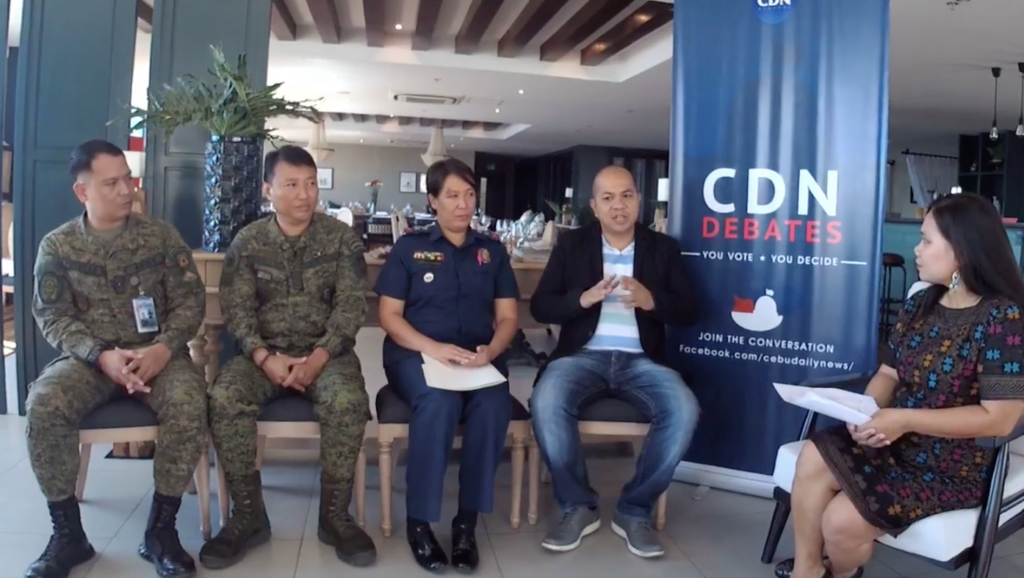 Officials from PRO – 7, AFP Central Command, and Comelec – Cebu City are the first guests to grace the pilot episode of CDN Debates, a seven-part Facebook Live coverage in line with the May 2019 midterm elections. |CDN Digital

In previous reports, the PRO – 7, Comelec in Cebu, and the AFP recommended placing the towns of Tuburan and San Fernando under the red category. They cited the presence of armed groups in Tuburan, and the series of killings involving elected public officials in San Fernando, as reasons in doing so.

But Rayos said the police, Army, and election officials agreed not to push through with their initial plans.

“We observed that it’s not that intense anymore. We did several validations together with other agencies, and we agreed that there’s no more presence of NPA (New People’s Army) and criminal gangs,” she added.

As a result, the towns of Tuburan and San Fernando will remain under the orange category.

Aside from the PRO – 7, officials from Comelec – Cebu City and AFP Central Command were the guests of CDN Debates’ pilot episode. The 25-minute Facebook Live coverage highlighted each agency’s preparations in line with the elections, especially in terms of peace and order.

The AFP Central Command (Centcom), for their part, said they were ready to prevent any possibility of politicians using armed groups throughout the election season.

“If politicians cannot help themselves but to tap private armed groups and goons, and that’s when the AFP will intervene. We are ready to prevent any incident that may arise from the presence of armed men,” said Major Abel Potutan, acting public information officer of Centcom.

Meanwhile, Lawyer Marchel Sarno, Comelec – Cebu City North District officer, said they were 85 percent ready for the campaign period for the local elections, which had been slated this March 29, Friday.

“We’re 85 percent ready. And now, we are working on further coordination with government agencies who are willing to help for a successful, peaceful, and orderly campaign period,” Sarno said.

He also lauded the efforts of the Cebu City Police Office (CCPO) on putting up checkpoints in various areas in the city.

“I’m glad for the police presence and visibility in Cebu City especially that they are now conducting 24-hour checkpoints. And every station will send us text messages, to inform our office of which areas will be covered by these checkpoints,” Sarno said.

Cebu, dubbed as a vote-rich province, has a total of 3 million registered voters who are ready to cast their votes for the May 2019 midterm elections. /dbs

MISSED THE LIVE COVERAGE? We’ve got you covered. Click the PLAY BUTTON below: