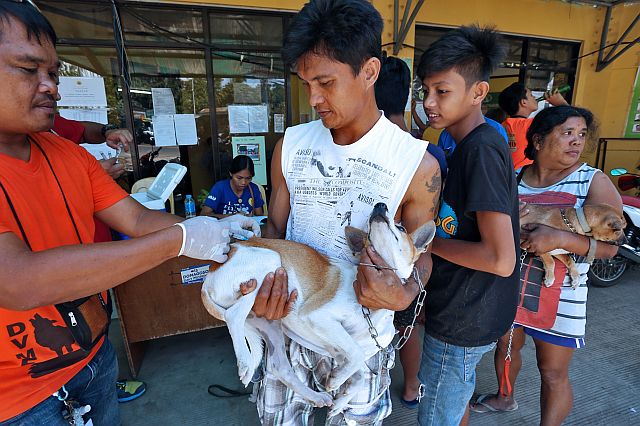 A member of the CDN PHOTO/JUNJIE MENDOZA

CEBU CITY, Philippines — The dry hot season made worse by the El Niño phenomenon has the potential to increase the risk of rabies among dogs.

This was the pronouncement of Doctor Alice Utlang, the head of Cebu City’s Department of Veterinary Medicine and Fisheries (DVMF) with the summer nearing its peak on May.

Utlang said that the DVMF had no longer enough rabies vaccines to continue the free vaccination of the dogs in the city because the Department of Agriculture had only provided 10,000 doses for this year.

Utlang said that they only had five days worth of vaccines and their free vaccination programs would have to stop until they could ask the help of the Cebu City government.

Utlang wrote a letter to Councilor Dave Tumulak asking for the city’s help for additional funds for the rabies vaccines worth at least P2 million.

“We hope that this will be approved by the City so we can continue our vaccination program,” said Utlang.

For his part, Tumulak said he would be raising the concern to the City Council since rabies could be dangerous for the city with its huge population of dogs.

Tumulak said that the city would have to stock on rabies vaccines in case there would be various incidents of dog bites.

“Mao na nga ato gyod nang bantayan ang pagsaka sa rabies. (That is why we need to monitor the rise of rabies in the city),” said Tumulak.

Meanwhile, the DVMF is also asking for P70,000 worth of aid for the vitamins and boosters for the livestock in the upland barangays.

She said the livestock  would need to boost their health in order to survive the extreme heat brought by the El Niño. /dbs