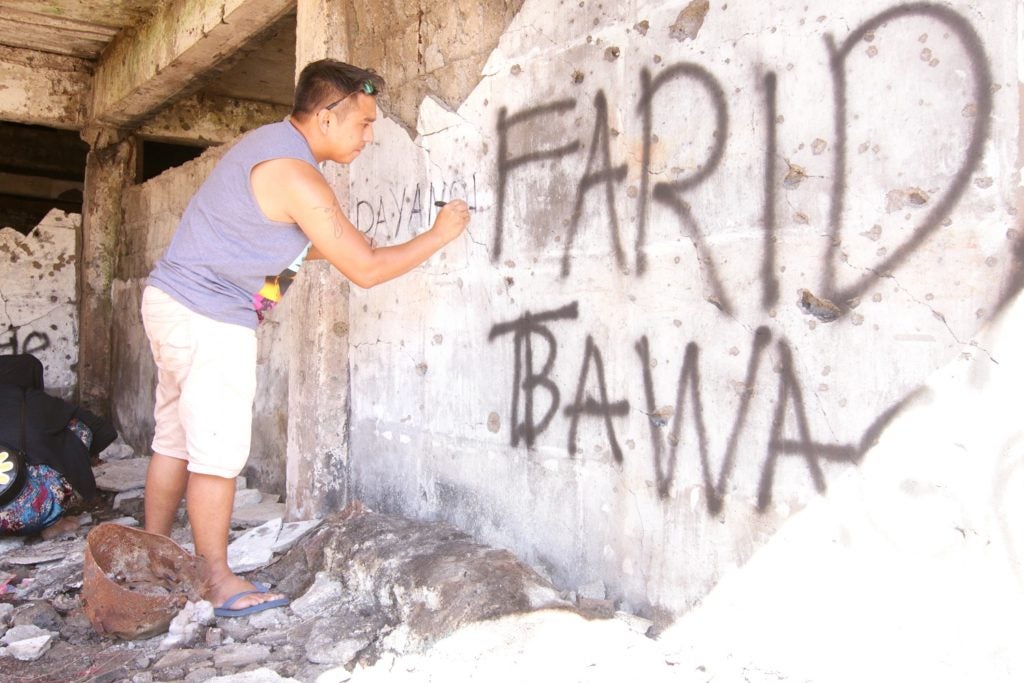 PBSP visited ground zero during the last day of kambisita (Maranao word for “visiting”), where in residents were allowed to visit their homes and other properties. Owners wrote their names and contact details on their properties so that they can be notified if these needed to be bulldozed to give way to a road widening./Contributed Photo

CEBU CITY, Philippines  – It has been nearly two years already since the Maute Group staged a major attack on major institutions in Marawi City and left the once-beautiful Islamic city in ruins. The five-month siege has left an indelible mark in the city’s economy, architecture, and the psyche of its people.

More than 350,000 individuals were displaced or 41 percent of the city’s population. After a year, thousands of families have made their way back to their ruined homes, but there are still 237,000 internally displaced persons (IDPs) who continue to occupy tent cities. Those who returned fared a little better, having little to no livelihood to come back to.

With the aim of providing an alternate livelihood source and to support the recovery of the affected families and the rehabilitation of their houses, the Philippine Business for Social Progress (PBSP) inked a partnership with Republic Cement for Project “Marawi Tibayanihan: Rebuilding Homes for a Stronger Marawi.”

“From our experience after several missions in Marawi City, we have developed a more responsive framework to guide our member companies and partner donors towards a more holistic and collective response, supportive of the needs of internally displaced people (IDPs) and local plans,” PBSP’s Executive Director Reynaldo Laguda said.

“There is an immense need that had to be filled and we are grateful for the flow of assistance and we are excited about Republic Cement sharing the vision of rebuilding towards a stronger Marawi.”

The goal is to form the Marawi Tibayanihan Crew — a group of skilled workers on carpentry, masonry, electrical wiring, welding, plumbing, and painting, among others. The workers will be trained further with the assistance of DTI and TESDA. At the end of the training, they would be self-reliant and could be tapped for construction services by the government, private sector, and other groups in the future.

Similarly, the project would help strengthen the brotherhood among Maranaos by enabling other Maranaos to help their people after the siege.

The project targets three communities: Barangays Raya Saduc and Bubonga, and Area 1 Transitional Community. Households from the two barangays  consisting of 44 families and 102 shelters will benefit from the recovery and rehabilitation assistance. Families who do not have the capacity to pay for labor and materials were the ones prioritized.

Under the program, the Tibayanihan Crew will provide labor services to each beneficiary-family. Furthermore, each family will also benefit from a grant for the needed construction materials, after an assessment of the condition of their homes and the required repairs.

“This is an important project for us. The development of Mindanao is in line with Republic Cement’s thrust in nation-building. As much as this project is about constructing stronger homes and buildings, it is also about strengthening the people’s hope that tomorrow can be better,” said Nabil Francis, Republic Cement Services, Inc. president.

Upon conclusion of the project, the Marawi Tibayanihan Crew will be endorsed to the stakeholders, especially to  the cocnerned barangays, the Marawi Local Government, Lanao del Sur Provincial Government, and Task Force Bangon Marawi, among others.

“This is not just an investment in rebuilding Marawi’s infrastructure, it is also an extended hand to families in desperate need of hope to keep on facing another day. Rebuilding stronger homes is all about strengthening families, and in turn, building a stronger Republic,” shares Francis.

“May Marawi Tibayanihan be a testament to the good that the private sector could accomplish when different entities and corporations come together and work toward a common goal,” Laguda said. “We can accomplish bigger things when we all work together.” /dcb