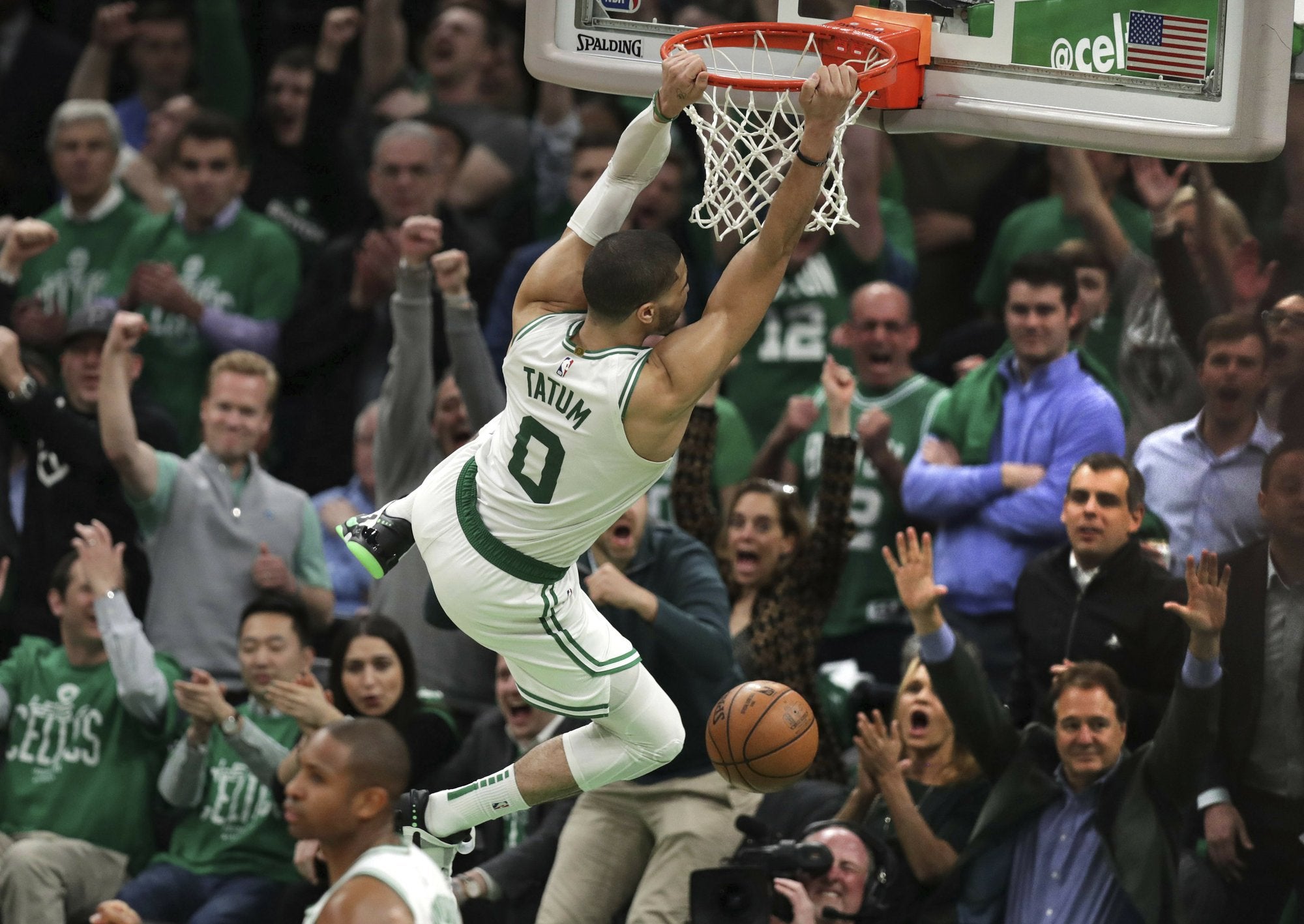 Jayson Tatum of Boston hangs on to the rim after a dunk in a Eastern Conference playoff game against Indiana. | AP photo

BOSTON — A poor third quarter did the Indiana Pacers in during Game 1 of their first-round series with the Boston Celtics.

In Game 2, Boston seized on a fourth-quarter collapse by Indiana.

Kyrie Irving scored 37 points and Boston rallied late in the fourth to beat the Indiana 99-91 Wednesday night (Thursday morning, Philippine time) and take a 2-0 lead in the best-of-seven series.

Coming out of a timeout and with a chance for Indiana to tie, the Pacers’ Wesley Matthews threw an inbounds pass into the bench on the other side of the court with 12.1 seconds left. On the ensuing play, the Celtics’ Al Horford passed to Jayson Tatum, who was fouled on a two-handed dunk. He completed the three-point play to make it 97-91 with 8.8 seconds left.

The Pacers turned it over again and the Celtics were able to close out the game at the free throw line.

Tatum scored 26 points, including his thunderous dunk down the stretch to help punctuate a 10-0 run by Boston over the final five minutes.

Irving said being able to have this kind of performance at TD Garden after sitting out the playoffs last season wasn’t lost on him.

“It’s just been a long journey,” Irving said. “From having those two knee surgeries and watching the team last year and finally getting chance to lace them up for the Boston Celtics in the NBA playoffs — it’s nothing like it.”

“It’s always been one quarter that kills us in the second half,” Thaddeus Young said. “We’re getting good looks and shots are not falling. … We gotta put together a 48-minute game and we haven’t been able to that.”

Game 3 is Friday in Indiana.

Darren Collison scored seven points during a 10-0 run that gave the Pacers a 70-58 lead in the third quarter as turnovers began to pile up for the Celtics.

Indiana led 79-68 entering the fourth. Horford opened the final period scoring on a hook shot in the lane and Tyreke Evans responded with a 3-pointer on Indiana’s first possession.

But then Boston got hot, using a 16-0 run, including eight straight by Irving, to take an 86-82 lead with 5:04 to play. Indiana missed 10 straight shots during the run, finally breaking a nearly eight-minute scoring drought with a 3-pointer by Matthews in front of the Celtics’ bench.

Bogdanovic hit a 3-pointer from virtually the same spot as Matthews to put the Pacers back in front. Gordon Hayward responded with a jumper, before Bogdanovic hit another 3 over Horford that made it 91-89 Pacers with 2:16 remaining.

Following an Indiana miss, Tatum connected on a 3-pointer from the corner. And after Horford blocked Bogdanovic at the rim, Tatum found a cutting Hayward for a layup and the Pacers were undone by their late turnovers.

“Missed a couple of good looks. Held them under a 100. The defense was still there. They made more timely baskets than we did,” Matthews said.

Horford was a game-time decision with an illness but was able to remain in the Celtics’ starting lineup. He was noticeably a step slower at the outset and didn’t’ take his first shot until late in the second quarter. He didn’t score his first points until the fourth, finishing with four points, 10 rebounds and four assists for the game.

“It wasn’t just about putting points on the board, it was just about doing the little things,” Irving said. “It was a gritty win.” /bmjo