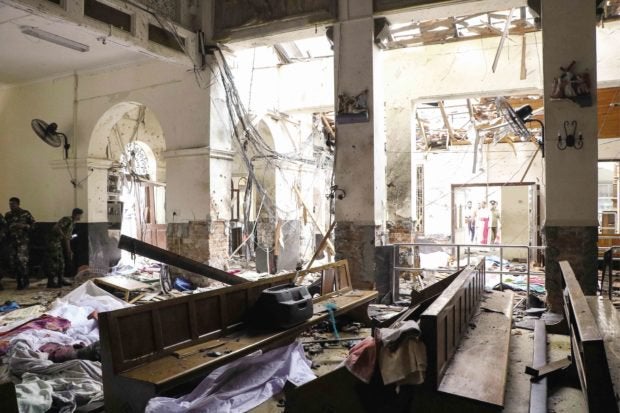 EASTER CARNAGE St. Anthony Shrine in Colombo, Sri Lanka, lies in ruins after bomb explosions rocked churches and high-end hotels, shattering the relative peace that has held the country since the civil war ended a decade ago. —AFP

More than 400 other people were wounded in the bombings, most of which the defense ministry said were suspected suicided attacks.

Prime Minister Ranil Wickremesinghe condemned the attacks as “cowardly” and said the government was working to “contain the situation.”

Images circulating on social media and local news stations showed extensive damage at one of three churches targeted in the near simultaneous blasts on Sunday morning.

Much of the church roof was blown out in the explosion, with roof tiles and splintered wood littering the floor and pools of blood in between wounded worshippers.

The injured flooded into local hospitals, where officials reported hundreds of wounded were being admitted.

Pope Francis condemned the attacks as “such cruel violence” and said he was close to the Christian community that was hit while celebrating Easter.

“I entrust to the Lord those who have tragically died and I pray for the wounded and for all those who are suffering as a result of this dramatic event,” he said.

US President Donald Trump, in a Twitter post, cited the “horrible terrorist attacks” and offered “heartfelt condolences” to Sri Lanka.

“The acts of violence against churches and hotels in Sri Lanka are truly appalling, and my deepest sympathies go out to all of those affected at this tragic time,” British Prime Minister Theresa May tweeted.

In a telegram of condolences sent to his Sri Lankan counterpart, Putin said Moscow remained a “reliable partner of Sri Lanka in the fight against international terrorism.”

The governments of the Netherlands and Australia sent messages expressing sympathy and support for Sri Lanka.

The government of the Philippines joined other nations in expressing solidarity with Sri Lanka following the blasts.

“We express our sincere solidarity and offer our heartfelt prayers to the citizens of Sri Lanka, as well as to the other people who have been affected by this horrific attack on the churches and hotels in the said South Asian country on what should have been a day for solemn prayer and thoughtful introspection,” presidential spokesperson Salvador Panelo said.

“As Sri Lanka currently sifts through the rubble and tries to find sense in this period of confusion and terror, we reiterate our expressions of support for our Asian neighbor, as well as to other countries who are dealing with the same evil deeds,” he added.

The Gulf Arab nations condemned the bombings, with the United Arab Emirates calling on “the international community to close ranks and uproot the scourge of terrorism in order to ensure international peace and security.”

Qatar said it wanted to stress its “firm stance on rejecting violence and terrorism.”

Bahrain said “these acts of terrorism are incompatible with religious principles and human moral values.”

Turkish President Recep Tayyip Erdogan condemned the the attacks, calling them “an assault on all of humanity” and offering his sympathies to the families of the victims.

The nature of the blasts was not immediately clear and there were no immediate claims of responsibility but officials said seven suspects had been arrested.

“A foreign intelligence agency has reported that the NTJ (National Thowheeth Jama’ath) is planning to carry out suicide attacks targeting prominent churches as well as the Indian high commission in Colombo,” the alert said.

The NTJ is a radical Muslim group in Sri Lanka that was linked last year to the vandalization of Buddhist statues.

The first blast was reported at St. Anthony’s Shrine, a well-known Catholic church in the capital Colombo.

A second deadly explosion was then confirmed at St. Sebastian’s, a church in the town of Negombo, north of the capital.

“A bomb attack to our church, please come and help if your family members are there,” read a post in English on the church’s Facebook page.

Soon after, police confirmed that a third church in the town of Batticaloa had been hit, along with three high-end hotels in the capital.

Hospital sources said British, Dutch and American citizens were among the dead, with Britons and Japanese among those injured in the attacks.

President Maithripala Sirisena said in an address that he was shocked by the explosions and appealed for calm.

On Twitter, Wickremesinghe wrote: “I strongly condemn the cowardly attacks on our people today.

“I call upon all Sri Lankans during this tragic time to remain united and strong. Please avoid propagating unverified reports and speculation. The government is taking immediate steps to contain this situation.”

Cardinal Malcolm Ranjith, the archbishop of Colombo, called on Sri Lanka’s government to launch a “very impartial strong inquiry” and to punish those found responsible “mercilessly because only animals can behave like that.”

The hotels targeted in the attack are all popular destinations for tourists, among them the Cinnamon Grand, which is near the prime minister’s official residence in Colombo.

A hotel official at the Cinnamon Grand said a suicide bomber blew himself up at people at the hotel’s restaurant.

“He came up to the top of the queue and set off the blast,” the hotel official said.

At the Shangri-La hotel, an AFP photographer saw extensive damage on the second floor restaurant, with windows blown out and electrical wires hanging from the ceiling.

Later in the day, police reported a seventh blast, the fourth at a hotel.

“There was an explosion in a hotel in Dehiwela near the zoo,” a police official told Reuters, adding there were no further details available.

An eyewitness on local television said he saw body parts, including a severed head lying on the ground near the hotel.

An eighth blast hit the suburb of Orugodawatta in the north of the capital later in the day, with police saying it was a suicide bomb that killed three police officers who had entered a residence there in search of a suspect.

Sri Lanka’s government ordered a night-time curfew and a temporary ban on social media after the explosions.

Embassies in Colombo warned their citizens to shelter in place, and Sri Lankan Airlines told customers to arrive at the airport four hours ahead of flights because of ramped-up security in the wake of the attacks.

Last year, there were 86 verified incidents of discrimination, threats and violence against Christians, according to the National Christian Evangelical Alliance of Sri Lanka (NCEASL), which represents more than 200 churches and other Christian organizations.

This year, the NCEASL recorded 26 such incidents, including one in which Buddhist monks allegedly attempted to disrupt a Sunday worship service, with the last one reported on March 25.

In its 2018 report on Sri Lanka’s human rights, the US state department noted that some Christian groups and churches reported they had been pressured to end worship activities after authorities classified them as “unauthorized gatherings.”

Read Next
Screening for Ginoong Pilipinas Cebu set this May