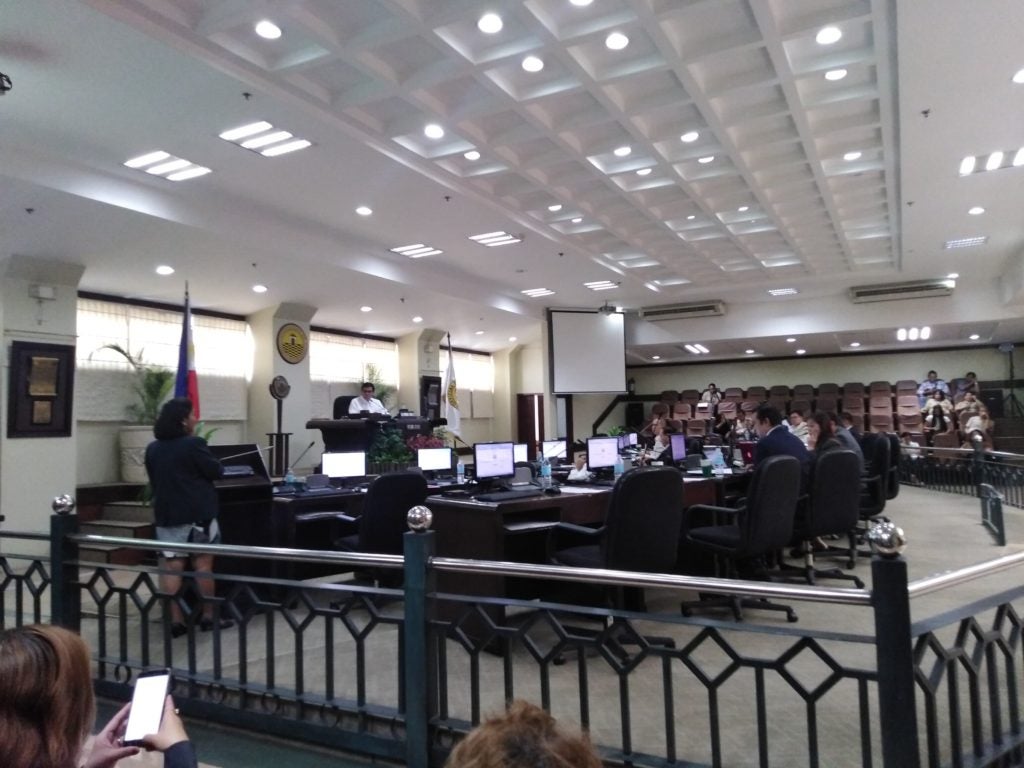 The regular session of the Cebu City Council on April 23, 2019 led to the discussion on the recent incidents against Bando Osmeña-Pundok Kauswagan (BO-PK) officials. | Delta Dyrecka Letigio

Councilor Joel Garganera, who is seeking reelection under Partido Barug-PDP Laban, said that Delos Santos’ speech was full of “grave accusations to the police.”

He asked Delos Santos on session if she was openly accusing the police for the strafing incidents of the houses of the village chiefs of three mountain barangays in Cebu City, to which Delos Santos answered, “Yes!”

In her speech, Delos Santos, who is running as vice mayor for BO-PK, said the police have been causing alarm in the city following the deaths of three individuals in Barangay Lusaran on February 22, the strafing incidents on April 4, and police’s presence in Delos Santos’ neighborhood looking for loose firearms on April 17.

“The abuse committed by the police is highly contemptuous and should be denounced in the strongest terms. This after they shot and killed the helpless people in Lusaran and strafed the houses of the Barangay officials in the mountain barangays,” said Delos Santos in her privilege speech.

Garganera said that before throwing such accusations, Delos Santos should provide proof that the police were directly involved in these incidents as these accusations can “greatly affect public confidence and interest.”

“What I’m trying to say is these allegations are imbued with public interest and it should at least be supported by some evidence, based on the personal knowledge of Delos Santos herself,” said Garganera in a text message to members of the media.

“I encourage her to raise these concerns before the proper forum like the courts and even raise it to the PNP Chief so that this will be investigated accordingly,” he added.

Councilors Raymond Garcia, Eduardo Rama, Jr., and Pastor Alcover, Jr., said that they have at some point been approached by the police in their own homes since they have firearms registered to their names.

Rama said the police officer, who visited his house, did not show any signs of violence and simply asked for a firearm that evidently was registered under the name of his father, the late Eduardo Rama, Sr.

“I explained to them the circumstance and there was no violence whatsoever,” said Rama.

Councilor Margot Osmeña, the wife of Mayor Tomas Osmeña, said the presence of a police checkpoint outside their home in the past days starting Holy Thursday, April 18,  up to present had her raised concern for the safety of her family.

She said the examples that Delos Santos raised, including the incident of other barangay captains being approached by the police without establishing their motives, are extraordinary events that should be looked into by the PNP and even the Department of Interior and Local Government (DILG).

Opposition Councilor Jocelyn Pesquera also agreed with Delos Santos’ move to condemn election-related violence as one of their party members was also a victim of violence in the 2016 elections.

Pesquera agreed to condemn the violence against BO-PK officials.

“I condemn all kinds of election-related violence,” said Pesquera.

Despite the arguments between the council members on the “accusations” of Delos Santos to the police, the council agreed to raise the concern to PNP Chief Oscar Albayalde and to the DILG in hopes that these incidents and other election-related violence will be investigated. / celr