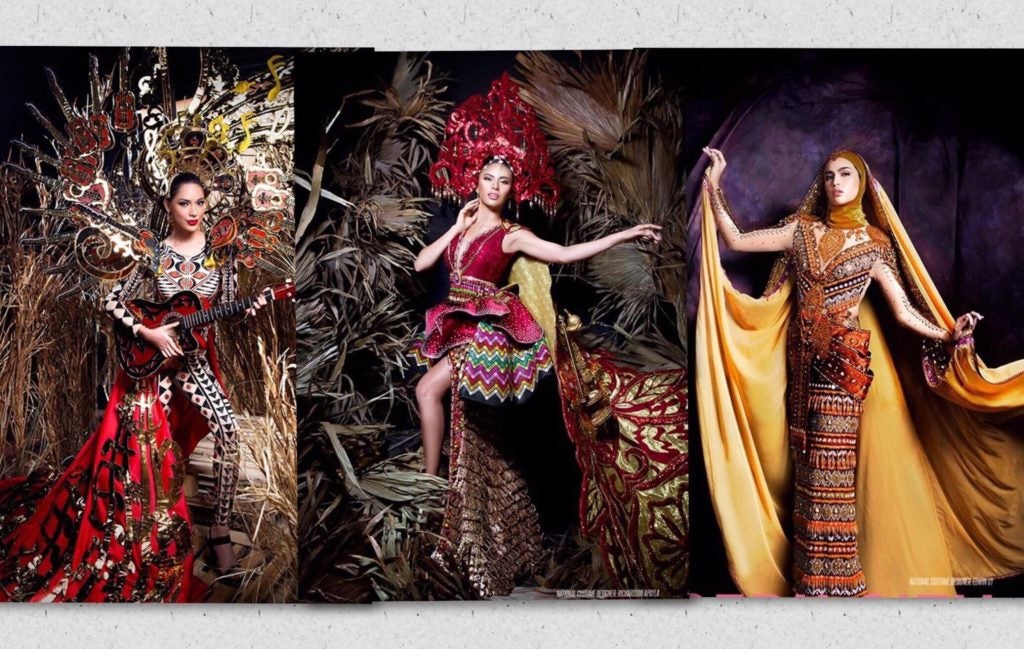 Cebu City, Philippines—Cebuana beauties nailed a photoshoot where they were wearing their national costumes for the Binibining Pilipinas 2019.

The official portraits were released by the pageant’s Facebook page on Tuesday, May 7, 2019, showcasing the rich heritage of the Philippines.

Ilene de Vera showcased that Cebu is not just known for lechon (roasted pig) and dried mangoes but also the home of world-class guitars in the country.

The Mandaue City native wore a headdress made of guitars and musical notes made by Cebuano designer Malayka Yamas.

“Cebu-made guitars are famous because of their affordable price, high quality, and durability,” she said in an Instagram post.

She also called Cebu the Guitar Capital of the Philippines in an  Instagram post because of the number of guitar manufacturers here.

In an interview with Cebu Daily News Digital, Yamas said the costume proves Cebuanos’ passion in music and arts.

“Guitars as the pride of the Cebuanos made us known to the world plus our well celebrated singers and performers,” she said.

When asked why she prefers to showcase Mindanao culture in the national costume, she told CDN Digital, “Edwin and I have a great relationship and ever since, I wore his costume for Turkey (Best Model of the World 2018).”

Currently, Lo is wearing the sash of Cebu City in the Binibining Pilipinas 2019.

She also takes pride that Uy has won 23 national titles in terms of showcasing his designs.

His recent win was during the Reina Flores De Mayo 2019 held at the Manila Hotel.

Uy has specialized in Muslim fabrics and costumes since 2002.

“This is a collaboration between us,” she said.

She will also use nails from the Tausug tribe of Sulu in Mindanao. The nails are commonly used for their native dance called, “Pangalay.”

On the other hand, Gazini Ganados is channeling Cebu’s Queen Juana designed by Richardson Apayla.

Being fascinated with Philippine history,

Queen Juana is the inspiration behind Ganados’ national costume.

In an interview with CDN Digital, the creation of the costume as whole is a representation of Cebu City’s Sinulog Festival.

“The costume is the combination of the products in Cebu Province. The multicolored embellishment, which is made up of wood, is a product of the province that has grown and vastly distributed all over the country,” he said.

Pandan leaves are used as its decorative detail for some parts of Cebu province.

The red crown with flower on it also stands for her femininity despite of being a brave queen.

There is also a replica of the original image of Señor Santo Niño adorned on its cape while its ornamentation makes the image holy and sacred.

The presence of Señor Santo Niño on her costume stands for the thanksgiving of Cebuanos for all the blessings and guidance from the Holy Child. /bmjo

By: Immae Lachica
read more
TAGS:
Latest Stories
Have you been to Libo Hills?
Daniel sa pagpapakasal kay Kathryn: Ready na ako
bai Hotel Cebu to have a MALL SALE in Manila
Solenn Heussaff shows funny comparison between 80s and 2020s mums
Toni Gonzaga proud to have made a stand
Most Read
Motorcycle rider avoids manhole, dies after SUV slams into him from behind
Raven Faith Alcoseba: The hard climb to her SEA Games dreams
Waterfront city in Mandaue seen to generate thousands of jobs in Cebu
2 Cebu grads among topnotchers of May 2022 Civil Engineer Licensure Examination
Jinkee Pacquiao to Manny: ‘I’m proud to have stood with you every step of the way. Forever