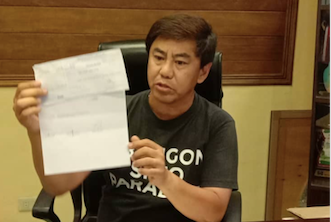 LAPU-LAPU City, Philippines — Pajo Barangay Captain and Lapu-lapu City mayoralty aspirant Junard “Ahong” Chan believes that the support of the Iglesia Ni Cristo (INC) will not be significant enough in determining the winning candidates in the May 13 mid-term election.

Earlier, Lapu-lapu City Mayor Paz Radaza announced that all candidates under the Lakas-CMD/Team Deretso were endorsed by INC in the upcoming elections.

(We are grateful for Iglesia ni Cristo for fully supporting our Team Deretso.)

But Chan said he doubted the INC endorsement to Team Deretso.

(I don’t know if it’s true that they (Team Deretso) received the endorsement because when I asked members of the INC, they said that they had not yet received the ballot. That is where we can prove that they were endorsed if they are in the sample ballots.)

Chan is confident that he will also gain the support of some members of INC, since he has been supporting all of their activities.

Last 2016 elections, Chan said that INC had supported the candidacy of Rolando Patalingjug, who is running for mayor during that time, despite the claim of Radaza that INC had been supporting her since the previous elections./dbs