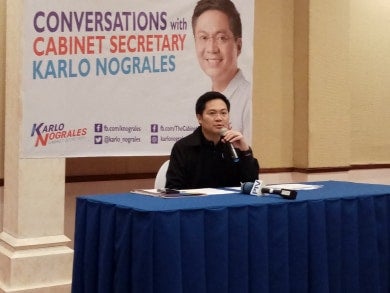 CEBU CITY, Philippines— Cabinet Secretary Karlo Nograles on Thursday disclosed that there was a low completion rate for the Yolanda housing construction in Cebu.

This holds true specifically in Camotes Island where not even one housing unit has been constructed, Nograles said.

He explained that the matter has to be discussed with the Department of Environment and Natural Resources (DENR) since the island has been classified as inalienable. This meant that no title could be issued.

Meanwhile, he gave assurance that the 22,423 housing units allotted for Cebu will be completed by 2020.

Nograles said there was a total demand of 205,128 housing unit along the Yolanda corridor.

Already, the construction of 5,272 housing units in Cebu has been completed. But he noted the low occupancy rate in these completed housing units.  Only 731 units (13.78 percent) have been occupied while 86.13 percent or 4,541 remained empty, he said.

He also called on the Local Water Utilities Administration (LWUA) to address water concerns of the Yolanda housing projects and for the National Electrification Administration (NEA) to fast track power connection projects to the housing units.

LWUA proposed that it would lump the bidding for various sites so it would have economic viability that would attract bidders, he said.

Nograles explained that the beneficiaries could not transfer to the housing units until these would be awarded to them.

For this reason, he urged the Department of Interior and Local Governments (DILG) regional office to coordinate their efforts with the local government units for the awarding of housing units to the beneficiaries.

“The LIACs play a crucial role in addressing the gaps in the Yolanda housing program so we can finally bring Yolanda rehabilitation and recovery to a successful conclusion,” Nograles said./dcb