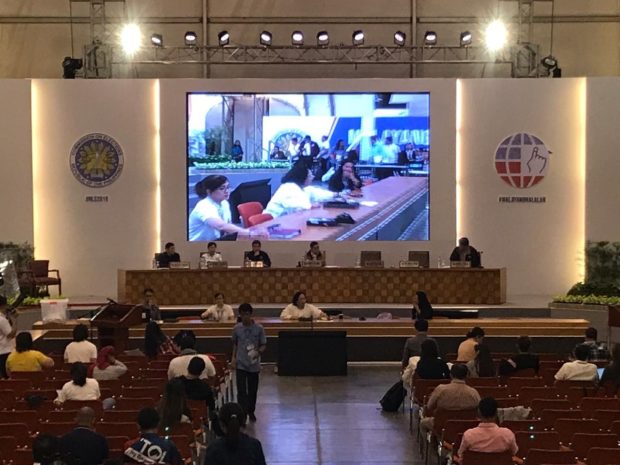 The National Board of Canvassers (Photo by DAPHNE GALVEZ / INQUIRER.net)

MANILA, Philippines — Re-electionist Sen. Cynthia Villar topped the 2019 senatorial race dominated by administration-backed candidates as the Commission on Elections (Comelec) finished the counting of all votes for the midterm elections.

The Comelec, sitting as the National Board of Canvassers (NBOC), finished the tally of the certificates of canvass (COC) early Wednesday, more than a week after the polling on May 13.

In the complete and official tally, Villar, who was endorsed by the administration Hugpong ng Pagbabago party (HNP), got a total of 25,283,727 votes.

On third is former Special Assistant to the President Christopher “Bong” Go, who ran under the ruling Partido Demokratiko Pilipino-Lakas ng Bayan (PDP-Laban). Go got 20,657,702 votes, followed by HNP-endorsed Taguig Rep. Pia Cayetano, who got 19,789,019 votes.

Actor Lito Lapid clinched his Senate comeback with 16,965,464 votes, ahead of Ilocos Norte Gov. Imee Marcos, another HNP candidate, who secured the eighth spot with 15,882,628, votes.

On Tuesday, the Comelec waited for the arrival of the final two Certificates of Canvass (COCs) from Saudia Arabia and Washington DC in the United States, which were left unaccounted for due to the late transmission of results.

The poll body canvassed the Saudi COC at noon on Tuesday, but it only received the COC from the US after waiting for more than 11 hours.

The poll body wrapped up the canvassing of votes exactly a week after it convened to officially tally votes from the May 13 midterm elections.

The Comelec had earlier expected to proclaim winning Senators and party-lists on Tuesday. But the delay in the arrival of the COCs prompted the poll body to reschedule it for Wednesday.