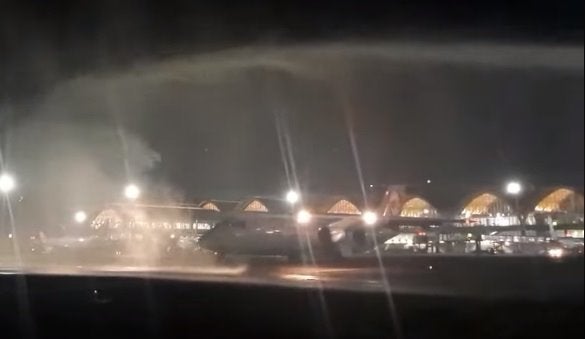 An aircraft from Royal Air gets the traditional departure water cannon salute during its inaugural flight on Tuesday, May 21, 2019. / GMCAC photo

CEBU CITY, Philippines—The efforts of GMR Megawide Cebu Airport Corp. (GMCAC) to make the Mactan Cebu International Airport (MCIA) a hub for domestic flights received a boost with the addition of a local airline as its newest airline partner.

“We are proud to be working with a carrier such as Royal Air Philippines who shares our vision to increase connectivity in the Central and Southern Philippines,” said GMCAC president Louie Ferrer.

Ferrer called that the launch of Royal Air Philippines as ‘timely’ even as MCIA sees double digit growth in traffic.

“We greatly welcome the support of Royal Air and our partner carriers in increasing domestic connectivity from Cebu. Most tourist areas in Visayas and Mindanao are only 25-30 minutes flying time from MCIA and we will continue to push in making Cebu a hub for both domestic and international flights,” Ferrer said.

Ed Novillas, chief executive officer of Royal Air Philippines, disclosed that they would open additional routes from the Cebu hub with more aircraft coming in later in the year.

“Royal Air is serious in expanding our market reach across the southern region,” Novillas said.

For the first quarter of the year, domestic traffic at MCIA grew by 13 percent, reaching close to two million passengers.