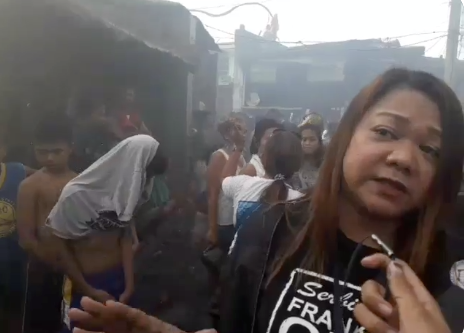 Acting Mambaling Barangay Captain Anne Marie Palomo discusses the assistance that the barangay will provide the fire victims during an interview at the Sitio Puntod fire scene on May 31. | Zena V. Magto

These were the immediate necessities needed by the Sitio Puntod fire victims that Anne Marie Palomo, acting barangay Mambaling captain, observed as she appealed for kindhearted Cebuanos for their help.

Palomo made the appeal during a phone interview with CDN Digital on May 31.

She said that these donations would be for the 119 families or 446 individuals displaced by the afternoon fire on May 31 that destroyed at least 70 houses between the boundary of the barangay’s Sitio Puntod and Huyong-huyong.

The fire victims were temporarily staying at the Abbya gym in Sitio Abbya.

Palomo said that the Abbya gym was made the evacuation center for the fire victims because it was the nearest space from the fire scene with access to electricity.

Palomo said that those who would donate could just bring their donations to the barangay hall.

Aside from the blankets, sleeping mats and fresh clothes, Wesley Yñigo, Cebu City Disaster Risk Reduction Management Office operations chief, said that the fire victims would also need clean drinking water as they had yet to assess the area.

(As of now, we are setting up the lights, portable toilets and other necessities in the evacuation site)

Meanwhile, Mambaling Barangay Captain Gines Abellana, who is facing a four month suspension over a honoraria dispute, told CDN Digital that he would be giving five kilos of rice to each family.

“We will also provide porridge for the victims,” Abellana said.

Read more: Mambaling standoff: Palomo urges Abellana to step down or barangay hall will be ‘a dark place’ /dbs

Read Next
From one playmaker to another: Manzo welcomes Mantilla to UP