BJMP turns to Capitol for help as jail congestion hits 500% 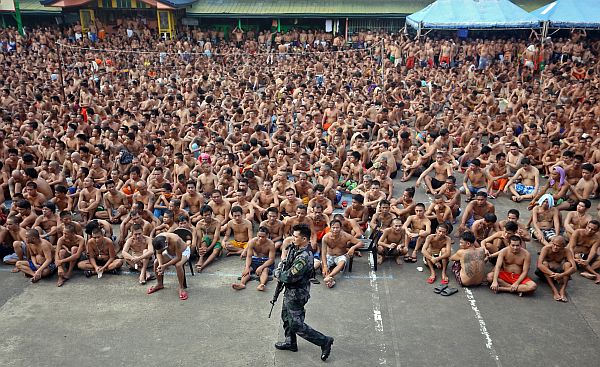 Inmates are herded outside as jail guards inspect jail cells in this 2017 photo at the Cebu Provincial Detention Rehabilitation Center. | CDN file photo

CEBU CITY, Philippines — The Bureau of Jail Management and Penology (BJMP-) in Cebu has requested the provincial government to provide lots for the construction of jail facilities in the towns of Santander and Barili.

“As of this date kasi po yung PNP po natin sir napakasipag and dami na pong mga inmates natin. We have a total of 16,647 inmates in 21 jails just in Cebu province with a congestion rate of 570 percent,” Malahay said during the Provincial Peace and Order Council (PPOC) held at the Capitol on Thursday, June 13.

Malahay said they planned to construct additional jail facilities in the towns of Tuburan, Balamban, Barili , Santander and the city of Toledo within 2019.

The BJMP, however, does not have lots yet for the proposed jail facilities in Barili and Santander.

Aside from jail lots, Malahay also asked the Capitol if it could provide an office for the BJMP Provincial Office which currently shares an office with its regional office.

Outgoing Governor Hilario Davide III, who chairs the PPOC, said he would endorse the BJMP’s request to Governor-elect Gwendolyn Garcia.

(We are short of time [within my term] already. I told them that we will look for space but since we lack time within my term, I will have to endorse their request to Governor Garcia.)/dbs