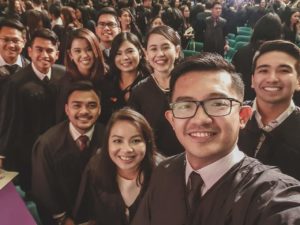 CEBU CITY, Philippines – There goes 10 topnotchers in one frame.

University of San Carlos alumnus and now lawyer, Marcley August Natu-el, shared a group photo of himself with fellow topnotchers of the 2018 Bar Examinations.

The new lawyers took their oath on Thursday, June 13, at the Philippine International Convention Center in Pasay City.

Natu-el, who was the second place in the Bar Examinations, said he asked his fellow topnotchers for a group photo as a remembrance.

He captioned the photo, which he posted on Facebook, with: “Finally got to see these guys in person. We used to be just 2×2 pictures on a piece of paper. Lol. Bar Exam 2018 topnotchers, complete from 1 to 10.”

He ended the post with smiley face emoji and used #hashtaggeneration.

Natu-el is one of the four topnotchers from the University of San Carlos in the 2018 Bar Examinations.

Asked what the atmosphere was when he met his fellow topnotchers, Natu-el said: “Everyone was really friendly. We had a lot of time to talk and get to know each other before the program started. I’d like to say that we all immediately became friends.”

Natu-el said he will still have to sign the roll of attorneys to finally and officially become a lawyer.

“After that, I’ll finally start my career as a lawyer,” he told CDN Digital.

Natu-el said he will serve the Philippine government in his capacity as a lawyer.

“I’ve always wanted to be in public service,” said. Natu-el, adding that the passion to serve was a virtue that he learned from his father, retired Police General Mariano Natu-el, Jr.

Read Next
Comelec en banc rules: Arcilla disqualified to run in May 2019 elections