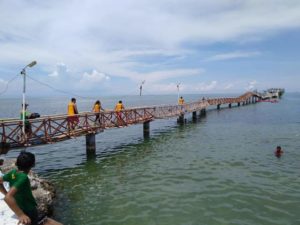 On Saturday morning, June 22, 80 racers from 20 teams left Golden Sands Destination Resort in Daanbantayan town and traveled to the neighboring Kandaya Resort in the same town for the “Dynamic Duo” challenge.

In the dynamic duo challenge, two team members are blindfolded and are given the task to fetch water using two cups until the given container is filled up.

The other two members help them navigate.

Each team is composed of four members.

From Daanbantayan, the teams traveled to Kawit, Medellin for an adventure challenge in Guibitngil island but technical challenges and weather concerns prevented race organizers, Habagat Outdoors and Cebu Chamber of Commerce and Industry, from pushing through with the challenge.

From Kawit, the teams proceeded to Bantayan Beach Resort in Barangay Tindog, Medellin for the “Seafood Delight” challenge which required the teams to run on a bridge toward a floating cottage to take seafood and seaweeds which comprise part of the task.

Racers then swam 1.2 kilometers from the floating challenge to the main platform and ate the seafood and seaweeds.

At the Miraculous Medal Shrine in the City of Bogo, the racers were given an IQ test challenging them to list the items that they found all the way up to the shrine.

At the town’s plaza, racers needed to shoot ping-pong balls in order to obtain puzzle pieces which led to the next clue.

The day ended with a Grill Fest challenge at the Lapyahan sa San Remigio, where participants were given raw meat and other materials to grill their food which they had to eat in order to be declared as finishers of Lumba’g Laag sa Sugbo Day 2.

That is why the travel time between each stop does not have a bearing in terms of computing the speed of each team.

Instead, each team’s performance is recorded based on the amount of time they spent in completing each challenge.

At the end of Day 2, organizers announced the following partial and unofficial ranking results: