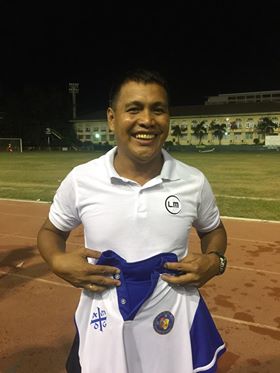 CEBU CITY, Philippines – Cebu now has its  second “A”-licensed football coach after Oliver “Bingbing” Colina was one of the five who passed the Asian Football Confederation (AFC) ‘A’ Coaching Certificate Course handled by the Philippine Football Federation (PFF) in 2017 and 2018.

According to Maro, Colina is the second Cebuano coach to get A certified. The first was Bro. Mari Aberasturi.

(I am super happy of course, at least all the hardwork and sacrifice that I did for the course paid off.)

At present, the 37-year-old Colina is the head coach of the Sacred Heart School-Ateneo de Cebu (SHS-AdC) secondary football team and the Leylam FC.

An “A” certified coach can coach a professional club or the men’s national team.

He may never get that chance, said Colina, but he will continue to hope because he also wants to elevate his coaching career.

Colina has previously coached the Philippine National Under 13 and 14 dubbed as the Little Azkals Born 98-99 to a third place finish in the Japan-East Asean Football Exchange Programme U-14 Youth Football Festival, which was held in Osaka back in 2012.

As an A licensed coach, Colina said he is willing to share his knowledge to further improve the Cebu football community.

“I want to help maybe in mentoring the new coaches. I can attached them with my team. Maybe I can also give a coaches workshop. Hopefully we can make plans for the entire football in Cebu, so it can level up,” said Colina.

“Grabe sad among naagian para makuha na nga certificate,” quipped Colina,  adding, “Pero, at the end of the day I wanted to work harder para maka hatag og idea sa tanan bata, ‘coz for me there’s no secret in football.”

(We went through a lot just to get that certificate. But at the end of the day, I wanted to work harder so I can give the kids more ideas coz for me there’s no secret in football.)

According to Colina, the course was done differently from the previous ones conducted. Instead of one month, it was divided into two phases with each phase consisting of 15 days. In between the two phases, the coaches have an assignment in which they have to accomplish in their respective football associations. They must also pass in the second phase.

Maro said that most of those who took the course was not able to do this.

During the first phase, Colina said that they’re given three to four assignments almost everyday. And that there was a lot of pressure.

(Sometimes we get to sleep at 2am to 3am because there was a lot of pressure.)

Colina mused that he never imagined that he would get to the level of becoming an A licensed coach.

(Never really. When I got my C, I was fine with it. But along the way, while I continued coaching, I got more interested.)

Colina said he has so many people to thank for all the licenses he got as a football coach, including the Cebu Football Association (now Central Visayas Football Association), as without its endorsement, he would not have been able to take all those coaching certificate courses.

(I am grateful to those who have helped me since I took my C license until I have become an A licensed now. I have never forgotten them. I won’t mention names because they’re so many. But I know that they’re happy when I always help about football and when I’m able to contribute to the Cebu football community.) /bmjo