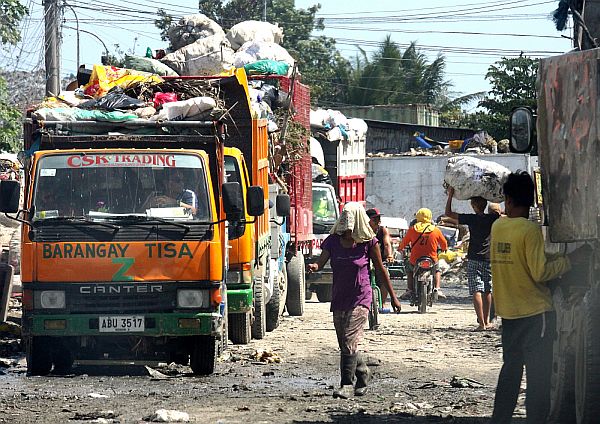 Cebu City’s garbage collectors head to the city’s transfer station at the Inayawan landfill to dispose garbage that they collected from the barangays. | CDN file photo

CEBU CITY, Philippines — The Inayawan landfill in Cebu City is still closed in accordance with the writ of kalikasan issued by the Supreme Court (SC) for it, but the transfer station outside the landfill has already been gathering mounds of trash as well.

A resident along the White Road in Barangay Inayawan told CDN Digital in a text message that the smell from the transfer station could reach their house, which is at least 150 meters away from the actual site.

The resident, who requested anonymity, said that there had always been a stench in their 10 year stay in the area from the transfer station, since it was established in 2016.

But the resident said that unlike today, it could not be quite noticed unless a person would be quite close to the station.

Their family noticed that with the intensified collection of garbage by the city government in the past days following the directive of Mayor Edgardo Labella to the Department of Public Services (DPS), the smell had been growing stronger especially at night.

(At night, it smells bad because the trucks arrive to dump in the transfer the station after collecting garbage. It’s not as strong in the morning when there is only a slight stench. At night, the smell is quite irritating.)

Department of Public Service (DPS) head, Engineer Biton, said that the increasing smell might be a result of the intensified garbage collection of the garbage trucks of the city government in accordance with the marching order of the new mayor.

He said that recently, they had begun collecting the garbage from the establishments, which already complained of delayed collection in the past days as the DPS focused on the main thoroughfares of the city.

“The garbage from these establishments were uncollected for some time, and they do smell bad already. We just recently collected them and dumped them to the transfer station. I think this is what is causing the smell,” said Biton in Cebuano over the phone.

He added that there had also been delays in the hauling of the contracted private haulers of the city because of the truck ban during the peak hours of the day.

Biton said that the delay of transferring the garbage from the station to the landfill might have also increase the stench of the accumulated garbage in the area.

The private haulers are tasked of carrying the garbage from the transfer station to the privately-managed landfill in Barangay Binaliw.

Their contract should have ended by June 30, but they still needed to fulfill the remaining 6,000 tons of garbage they needed to transfer for the city.

The DPS is expecting the private hauler to complete its end of the contract by July 20.

He asked the residents to be patient as the new administration had been looking for ways to solve the stench and to solve the hauling of the garbage.

Mayor Edgardo Labella said in an interview on Friday, July 5, that they were reviewing the contract with ARN Central Waste Management Inc., the developers of the Binaliw landfill, as the problem on garbage had grown worse.

He said that there had been a remaining P6 million budget for the disposal of the garbage from the transfer station, and he would want the budget to be fully used before they would begin to find another private company to manage the waste, in this case, the ARN.

In the last City Council, they were able to approve a P65 million budget for the ARN contract, and Labella is looking into using this budget after they reviewed the contract with ARN.

The city only has 15 days left to decide on this before the current private hauler stops serving the city.

Labella clarified the circulating reports that the Inayawan Landfill had been reopened and said the city would respect the writ of kalikasan.

“That (opening of landfill) is not possible because that is a clear violation of the writ of kalikasan,” said Labella.

The mayor has also directed the DPS to look into ways to minimize the stench before this can lead to health problems. /dbs