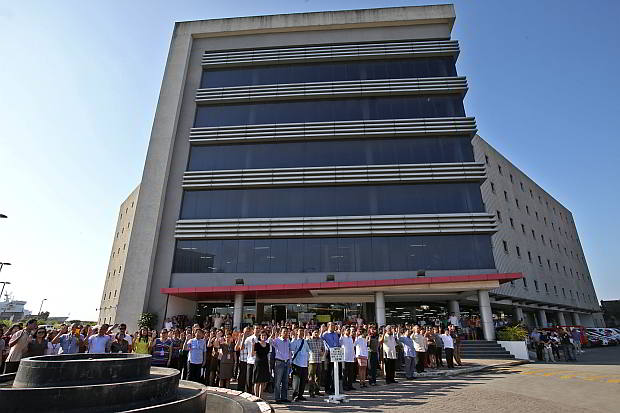 Court employees and judges attend the flag-raising ceremony in front of the Qimonda IT Center. (CDN PHOTO/ JUNJIE MENDOZA)

After five months of doing business in makeshift tents, Cebu’s judiciary yesterday went back to normal as its new courthouse at the Qimonda IT Center in the city’s port area opened yesterday.

Judges, lawyers, prosecutors, court employees, and litigants showed up at the Qimonda IT Center yesterday where the judiciary was relocated from the Palace of Justice which was condemned following the 7.2-magnitude  earthquake that rocked Central Visayas in October last year. “We’re back to normal business. After five months, we’re finally able to hold a flag-raising ceremony,” Executive Judge Soliver Peras of the Regional Trial Court (RTC) in Cebu City said.

The 22 RTCs and the eight Municipal Trial Courts in Cities (MTCCs) have to take turns in conducting hearings inside 11 courtrooms built at the ground floor of the Qimonda building.

Some judges set up their own courtrooms in areas reserved for them and their staff.

All eight branches of the MTCC and RTC branches 5 and 6 are located at the ground floor of Qimonda building. The rest are on the second floor.  Police officers were also detailed at the Qimonda building. Other than passing through the stairs, court users can use the elevator in going to the upper floors.

While waiting for the construction of the offices and the individual courtrooms to be completed, judges and employees temporarily hold office on the ground and second floors. Peras said the  partitioning of rooms in the upper floors may start next week.  “It will take four months to finish the construction work as well as the installation of air conditioners on the third and fourth floors. As soon as it is finished, we’ll transfer there,” he said.

Peras, who has been busy monitoring court operations in Qimonda, said they requested the Cebu City Traffic Operations Management (Citom) to allow PUJs to drop off and pick up passengers in front of the courthouse.

He said they also asked the Cebu Ports Authority to re-route cargo trucks passing near Qimonda so as not to inconvenience employees and litigants.

Read Next
Rama to Filinvest: It’s time for you to pay