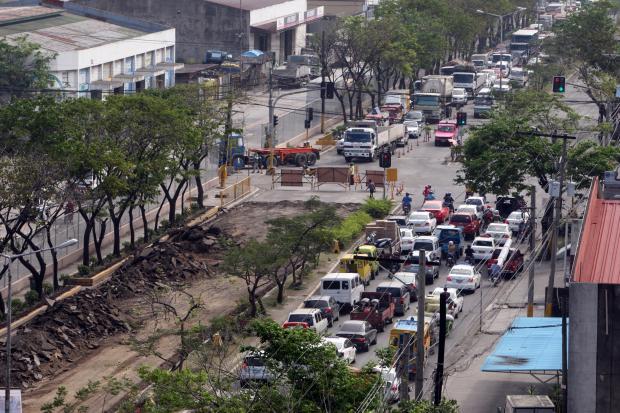 Vehicular traffic was slow but manageable on the first day of the partial closure of the 900-meter portion of S. Osmeña Road in the North Reclamation Area of Cebu City.

“Most of the congestion was  in the entrance and exit points near the construction area, but it’s still moving traffic,” said Cebu City Traffic Operations Management (Citom) operations chief Joy Tumulak.

Vehicles were rerouted around the affected area.

The  north-bound lane of the S. Osmeña Road undergoing repair was closed from the corner of Gen. Maxilom Extension, near the gate of Pier 4 up to the corner of Juan Luna Extension near Radisson Blu hotel.

Heavy congestion was observed past 7 a.m. to 9 a.m. at  Baclig Street (Port Service Road) where  northbound traffic was diverted.

Vehicles going to and coming out of the Qimonda IT Center , which now houses the Cebu City court offices, also contributed to the heavy traffic.

However, some drivers of public utility vehicles  were confused and failed to reach the terminal in SM City.

He saidhe expects passenger jeepney drivers to adapt to the new route by today.

Taxi drivers worry that the slow traffic would reduce their earnings.

“Every hour we need to target more than three passengers but because we are trapped in  traffic,  we are expecting to have only one passenger in an hour,” saidAlexander Villarba, 51.

When there is a heavy traffic he said he spends more than P1,000 a day for  gasoline alone and brings home  P500.

Villarba said he still has to pay P890 a day to the taxi owner as  rental  and only has 14 hours a day to  drive.

Cebu Daily News took a taxi from   Mandaue City Hall to Plaza Independencia around 9 a.m. via  Ouano Avenue in Mandaue City and S. Osmeña Road in Cebu City side.

During light traffic conditions, the  four-kilometer route can be covered  in 10 to 15 minutes, said  Villarba.

Heading  back from Plaza Independencia to the Mandaue City Hall on the same route took longer at 40 minutes.

DPWH told: Do projects one at a time