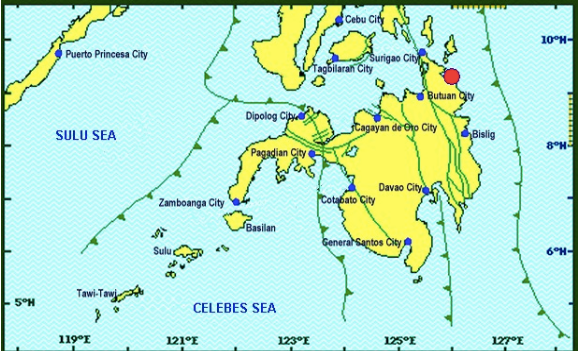 SURIGAO DEL NORTE, Philippines – Some 25 people were hurt and several buildings, houses and bridges were damaged in Surigao del Sur after a 5.5-magnitude quake hit the town of Carrascal at dawn on Saturday, July 13.

The tremor, which was tectonic in origin, struck at 4:42 a.m., with its epicenter recorded nine kilometers southeast of Carrascal at a depth of five kilometers, the Philippine Institute of Volcanology and Seismology (Phivolcs) said.

The main tremor was felt at Intensity 5 in Carrascal, Surigao Del Sur and in Butuan City, the regional center of Caraga Region.

De Guzman said the numbers could rise as reports from other localities come in. He added that they were advised of several rural health stations attending to people with varying injuries.

De Guzman explained that most of those injured were still in bed when the earthquake struck.

“Most were yet to get out of bed so they were caught off guard; we have reports of injuries from falling cabinets, broken glass and even collapsing walls,” de Guzman said.

Cantilan Mayor Carla Pichay meanwhile convened the Municipal Disaster Risk Reduction and Management Council (MDRRMC), Philippine National Police, Rural Health Unit and other agencies to assess the situation of the town in the wake of the quake. /muf