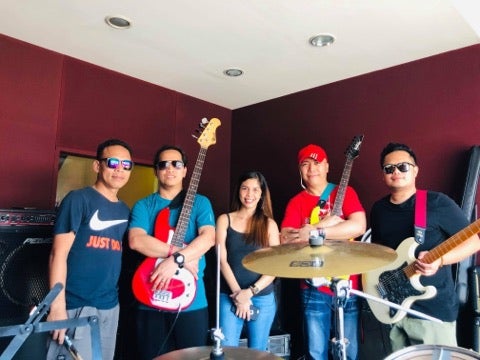 CEBU CITY, Philippines – They travelled to Taiwan to work in a factory there.

They met at their dormitory, became friends and started to play Bisaya Rock (BisRock) music to fight boredom.

From playing their favorite music for fun, the six friends decide in 2017  to form the group which they called K9 Band. Their first public appearance as a group was on March 2019, during the first ever Taiwan OFW Got Talent, which they luckily won.

(Our purpose for coming here is to work. We decided to play music to fight boredom especially since security at our dorm is very tight and we have a curfew to follow. We never expected that we will end up forming a band.)

Inso told CDN Digital that they chose to sing Bisaya Rock songs since most of their members come from Bisaya speaking places. Inso, Alegado, and Atabelo are Cebu natives while Quinicot, Dela Cruz, and Alegria are from Dumaguete City, Bohol province, and Tarlac respectively.

(We want to raise the banner of the Cebuanos.  People in Taiwan also embraced our music because there are a lot of Bisaya speaking people here.)

But even foreign nationals and Taiwan natives now enjoy their music.

Inso said they named their band K9 after his hair style.

(We called the group K9 because of my hairstyle. Other band members were teasing me that I looked like a K9 dog because of my refusal to get a haircut.)

Their first public appearance as a group was during the Taiwan OFW Got Talent competition in March.

Inso said they emerged as grand prize winners after competing with 46 other bands. “We did not expect too much that time. Unexpectedly, ni daog mi,” he said.

Since their victory, Inso said that they have been getting several invitations to gigs but had to turn down most of these because of their need to work at daytime.

But they agreed to play on Sunday, July 21, at the BisRock Fiesta 2019, a music and food festival in Hsinchu, Taiwan.  The festival includes the display of Bisaya songs, dances and even poems and famous Filipino food like the sinugba (grilled), tinola (stew), and kinilaw (raw),  and Cebu’s lechon (roasted pig).

As a long term plan, Inso said they also hope to release their own original songs for their Cebuano and Taiwanese fans.

(We have started to plan. We are now in the process, brain storming for our original compositions.