Filipinos among 23 crew of oil tanker seized by Iran 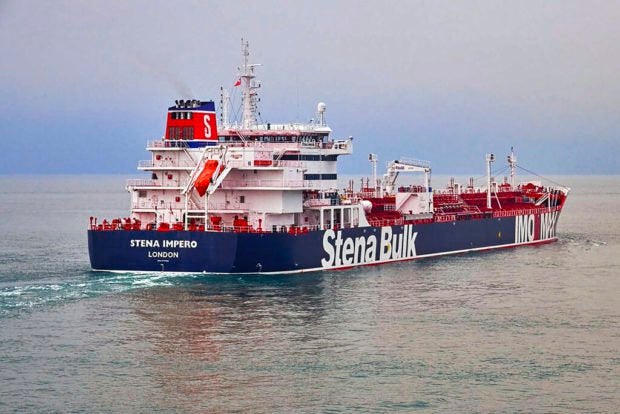 An undated photo of Stena Impero, a British oil tanker believed to have been captured by Iran. (Stena Bulk via AP)

Filipino seafarers were among the  23 crew members aboard the British-flagged oil tanker seized by Iran Friday in the Strait of Hormuz for allegedly violating international laws.

There were no reports any of the crew members that also include Indian, Russian and Latvian nationalities were injured.

The British tanker Stena Impero was taken to an Iranian port because it was not complying with “international maritime laws and regulations,” Iran’s Revolutionary Guard declared.

A statement from Stena Bulk, which owns the seized tanker, said it was unable to make contact with the ship after it was approached by unidentified vessels and a helicopter in international waters. A spokesman for the company’s owners said the tanker was in “full compliance with all navigation and international regulations.”

In Manila, there was no immediate reaction from the Department of Foreign Affairs.

The seizing of the tanker marked perhaps the most significant escalation since tensions between Iran and the West began rising in May. At that time, the U.S. announced it was dispatching an aircraft carrier and additional troops to the Middle East, citing unspecified threats posed by Iran.

The ongoing showdown has caused jitters around the globe, with each maneuver bringing fear that any misunderstanding or misstep by either side could lead to war.

Details of what took place Friday remained sketchy after Iran reported that it had seized a British oil tanker in the Strait of Hormuz. The strait at the mouth of the Persian Gulf is a shipping channel for one-fifth of all global crude exports.

The U.K. has featured prominently in the recent tensions with Iran. Britain’s Royal Marines assisted in the seizure of an Iranian oil supertanker on July 4 by Gibraltar, a British overseas territory off the southern coast of Spain.

Britain said it would release the vessel if Iran could prove it was not breaching European Union sanctions on oil shipments to Syria.

Gibraltar’s government said Friday that its Supreme Court had extended by 30 days the detention of the Panama-flagged Grace, which was loaded with over 2 million barrels of Iranian crude oil.

Tensions in the region have been escalating since US President Donald Trump withdrew the U.S. last year from Iran’s 2015 nuclear deal with world powers and imposed sweeping economic sanctions on Iran, including its oil exports. The sanctions have hit the Iranian economy hard.

Iran’s government has desperately tried to get out of the chokehold, pressuring the other partners in the nuclear deal, particularly European nations, to pressure the U.S. to lift the crippling sanctions.

The Europeans — Germany, France, Britain, and the European Union — want to maintain the deal, but have not been able to address Iranian demands without violating the sanctions. Iran has begun breaching some of the restrictions on its activities outlined in the agreement to put pressure on them to find a solution. Associated Press with INQUIRER.net