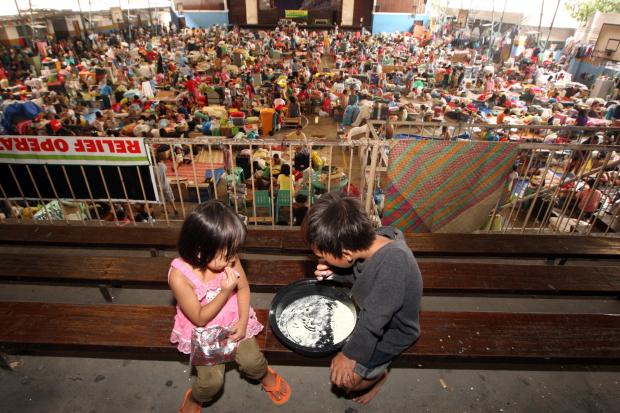 Two kids found space for themselves and feast on powdered milk given by the Cebu government at the old Sacred Heart School Gym which served as one of the evacuation centers of people displaced by Tuesday’s fire in barangay Lorega. (CDN PHOTO/ TONEE DESPOJO)

As arson investigators look into the cause of Tuesday’s blaze in barangay Lorega San Miguel, displaced families filled the gym of the old Sacred Heart School in General Maxilom Avenue in Cebu City where some of them are now being housed.

Fire victims who initially occupied the road the day after the fire, were taken to covered basketball courts in barangays  Day-as, T. Padilla and Zapatera.

City Hall earlier said the Department of Social Welfare Services will be providing the meals until today.

No one will be allowed to return to the fire site to rebuild their houses as City Hall will be reblocking the area.

The fire victims were however assured by City Hall that no one will be evicted during the reblocking process.

The March  18 fire displaced almost half of the population of barangay Lorega San Miguel or a total of 5,500 individuals or 1,320 families in eight out of  14 sitios. It was earlier estimated that the affected residents could reach 7,000.

“We assure the victims that they won’t be evicted. But first we need to reblock. We want the residents to understand the need to reblock the area and create roads and alleys,” said City Engineer Jose Marie Poblete, who heads Task Force Lorega.

He was given a month by Cebu City Mayor Michael Rama to complete the reblocking which will start this weekend or next week after consultations are made with barangay officials, homeowners associations and residents.

Most of the fire-affected area is owned by the city government. Out of 20,000 to 25,000 square meters, about 2,000 square meters are private-owned, said Collin Rosell, chief of the Division for the Welfare of the Urban Poor.

Among the theories being looked at on the cause of the fire are electrical malfunction, an unatttended stove and children playing with matches.

Some residents mentioned a possible explosion of a butane gas stove, which are commonly used in low-income households.

Fire was first seen on the roof of one of the houses, said Cebu City Fire Marshal Rogelio Bongabong.

Two to three witnesses will be invited to shed light on the incident, said arson investigator Daniel Relatado yesterday.

Five people were injured in the blaze.

Ten tents and 50 sacks of used clothing were also given by the province’s social welfare office.

“The governor told us to help the city immediately,” she said.

Poblete promised that the area would be “better” after the fire, when interior paths are added through reblocking.

About two-thirds of the fire site is owned by the Cebu city government with lots already awarded to residents through the Community Mortgage Program (CMP), he said.

They are still verifying the private lot owners in the remaining one-third.

Vice Mayor Edgardo Labella assured that the city government would intervene if any private lot owner tries to keep out residents.

“No one and nobody should take advantage of the predicament and misery of fire victims even if it’s private lot. We cannot let them suffer more by evicting them,” said Labella.

“We’re just restoring what has been there, but in a better manner. The residents were already there in the first place,” he said.

The number of displaced persons represent around 40 to 45 percent of the barangay’s total population of 20,000.

The day after the fire, families camped out on the streets. Traffic was barred from New Imus Road and Day-as Roads where fire victims stayed with their belongings strewn on the streets.

A state of calamity was declared in Lorega by the Cebu City Council after the fire which took ten hours to extinguish.  The council resolution included barangays Emrita, Bulacao and Mabolo which were also hit be fires earlier this month.  March is celebrated as Fire Prevention Month./ With Correspondents Peter L. Romanillos and Chito O. Aragon

Busy day for firemen: 700 houses in 7 sitios wiped out
Your subscription could not be saved. Please try again.
Your subscription has been successful.
Read Next
Sitoy shifts to using ‘positive’ stickers to fight cyberporn