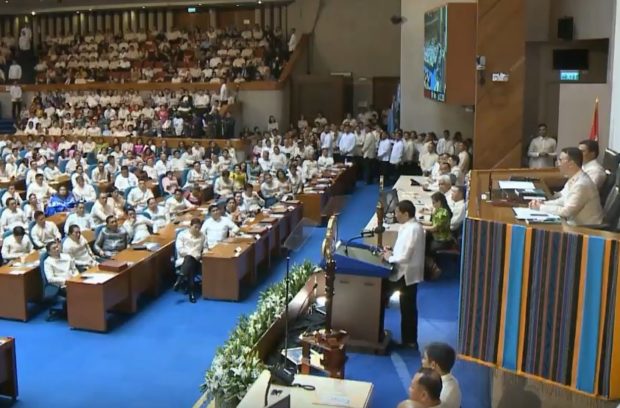 President Rodrigo Duterte delivers his fourth State of the Nation Address before a joint session of the 18th Congress at the Batasang Pambansa in Quezon City on Monday, July 22, 2019. (Screegrab from RTVM video via YouTube)

MANILA, Philippines — President Rodrigo Duterte on Monday called on Congress, during his fourth State of the Nation Address, to pass the second tranche of his planned tax system overhaul.

The President was referring to the Tax Reform for Attracting Better and Higher-quality Opportunities, or Trabaho, bill, which seeks to bring down the corporate income tax to the current 30 percent to 20 percent.

The House of Representatives passed the bill in September 2017. The Senate failed, however, to pass its counterpart measure — the Corporate Income Tax and Incentives Reform Act, or Senate Bill No. 1906, which remained pending at the committee level.

“I’m also asking Congress to pass the remaining packages of my administration’s tax reform program and the bills that will further raise [the] excise tax on tobacco and alcohol,” the President said.

The bill also seeks to update the incentives given to big businesses, such as tax holidays, to attract more foreign investors.