The state of Philippine poverty

The most often used measure of development of any country is its gross domestic product (GDP) expressed in total or in per capita basis. The bigger is the size of its GDP or the higher the per capita GDP, the richer that country is supposed to be.

Using GDP, however, as a measure of development could hide lot of things, one of which is the extent of poverty. This happens when the total income of the country is not fairly distributed or concentrated in the hands of the few, leaving the rest with very little to share among them.

Poverty is the state of being poor or extremely poor. In the Philippines, we measure poverty among our population or among our families using an income threshold below which one person or one family is considered to be living below the poverty line or below the food threshold level.

By government definition, food threshold is the minimum income required to meet the basic food needs, satisfying the nutritional requirements set by the Food and Nutrition Research Institute (FNRI) to ensure that one remains economically and socially productive.

On the other hand, poverty threshold is the minimum income required to meet the basic food and non-food needs for decent living such as better clothing and housing, fuel, light and water, transportation and communication, health and education, recreation, and other things.

The poverty threshold and subsistence threshold is estimated using the result of the Family Income and Expenditure Survey (FIES) conducted every three years by the government.

The last survey conducted was last year, which was done in two visits. After the first visit, the result was presented last April for the first semester of 2018 poverty report. It was this report that President Duterte cited in his State of the Nation Address (SONA) last Monday because the result of the second visit is not yet in. The whole report will be presented in October once the result of the second visit of the 2018 FIES becomes available.

In 2015, for example, the first half of the year report says that 27.6 percent of the Filipinos were living below the poverty line. This was almost the same as the figure reported three years earlier in the first half of 2012. However, for the whole year of 2015, poverty incidence was placed only at 21.6 percent, which was a big improvement to the 25.2 percent annual poverty incidence reported for 2012.

The plan of the present government is to bring down to 14 percent the poverty incidence of our people by the end of its term. It is interesting to see, then, what the final whole year 2018 poverty report will be once the result of the second visit of the 2018 FIES is known since this will indicate if the plan is achievable or to be exceeded. 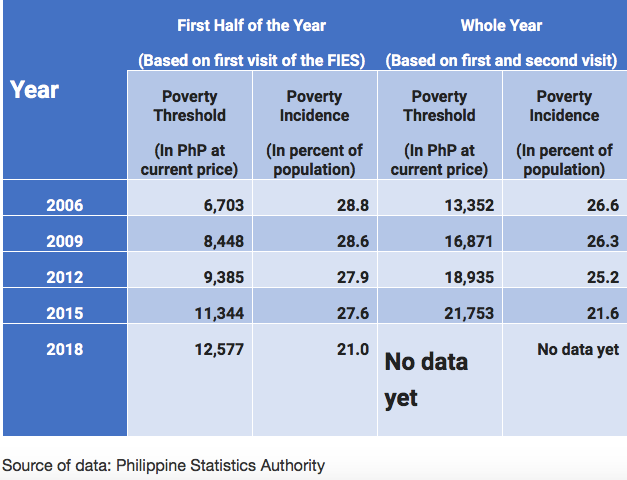