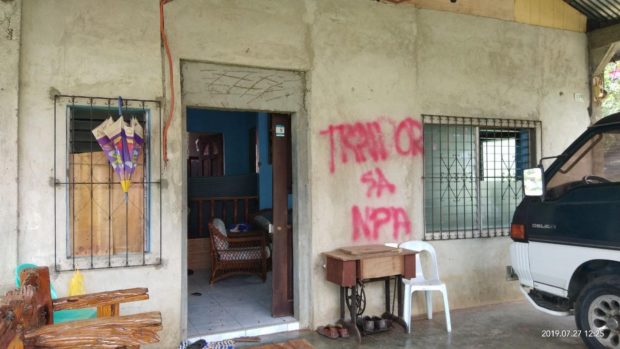 KILLERS LEAVE MARK Gunmen who killed early on Saturday Ernesto Posadas, Panubigan village chief, in Canlaon City, Negros Oriental, spray-painted allegations that he was a “traitor to the NPA.” The Communist Party of the Philippines denied any involvement in the series of killings in the province.

BACOLOD CITY, Negros Occidental, Philippines — The spate of killings in Negros Oriental province has raised concerns over the possible imposition of martial law on Negros Island.

At least 13 people have been gunned down separately in towns and cities in Negros Oriental since July 23.

The provincial office of the Philippine National Police reported that the gunmen involved in several of the attacks identified themselves as members of the New People’s Army (NPA).

But in a statement on Saturday, the Communist Party of the Philippines (CPP) denied the guerrillas were involved in  the attacks and blamed the military, police and paramilitary forces for the killings.

Militant groups expect the violence to be made the excuse for a crackdown on political dissenters and government critics.

“The killings will be used as a pretext for declaring martial law,” said Michael dela Concepcion, secretary general of  Bagong Alyansang Makabayan-Negros.

In the capital city of Dumaguete, Negros Oriental Gov. Roel Degamo said he was open to placing specific areas, like Guihulngan City, not the whole province, under martial law if warranted and if it could stop the killings.

But San Carlos Bishop Gerardo Alminaza said martial law was not the solution and could instead lead to more problems.

“How many more killings will it take for us to be able to hear these cries, and be moved to say, we are our ‘brother’s keeper’? As your pastors, we unequivocally denounce this total disregard for the primacy and sanctity of human life,” the Negros bishops said.

The bishops directed the ringing of church bells every 8 p.m. in all parishes, chaplaincies, mission stations and religious houses in the four dioceses to remember those who had been killed.

Five people, including a city councilor and a former town mayor, were separately gunned down on Friday night and early Saturday in Canlaon City and in the towns of Ayungon and Siaton.

Thirteen people have been killed over the past five days in the province, including lawyer Anthony Trinidad, who had been tagged as an NPA supporter by an anticommunist group along with his elder sister and brother-in-law. He was shot in his car in Guihulngan City last Tuesday.

At past midnight on Saturday, Canlaon City Councilor Ramon Jalandoni was gunned down by unidentified men who broke into his house.

The assailants fled on board a white van and green pickup truck after spray painting “Mabuhay ang NPA” (Long live the NPA) and “Traidor sa NPA” (Traitor to the NPA) on the walls of his house, police said.

On Friday night, motorcycle-riding assailants gunned down Fedirico Sabejon, a resident of Barangay 3 in Siaton town.

In its statement, the CPP held the “Duterte regime responsible for the Negros murder frenzy.”

“The killings are Duterte’s cowardly retaliation for the losses suffered by his police forces last July 14 in Ayungon town in Negros Oriental,” it said.

The rebels claimed responsibility for an attack on  July 14 in Ayungon. President Duterte has offered a P3-million reward for the head of the NPA leader responsible for the killing of the four police officers in that attack.

Degamo offered sympathies to the families of the victims and condemned the killings. “Stop it! This is too much!” he said.

He urged the PNP to conduct a “thorough and in-depth investigations on the cases involving guns for hire in the province.”

Asked if he was amenable to placing the province under martial law, Degamo said: “Not all (of the province). If that will be the solution to the problem and that will be only in Guihulngan, that is OK.”

“These are just few isolated cases … I don’t think so this is alarming. Negros Oriental is still in normal situation,”  Sinas said.

The PNP said it was taking measures to prevent a spillover of violence from Negros Oriental to Negros Occidental.

In Manila, detained opposition Sen. Leila de Lima filed a resolution calling for a Senate investigation of the killings of lawyers, citing the case of Trinidad and Val Crisostomo, who was gunned down in May at Dagupan City’s Hall of Justice.

“As the [Human Rights Watch] puts it, ‘[b]y silencing a lawyer, many victims are also silenced. But then perhaps that is the purpose,’” she said.

In March, an international delegation that investigated the killings of lawyers said the President’s tirades against members of the bar have given their attackers a “license to harass and kill.” —With a report from Leila B. Salaverria