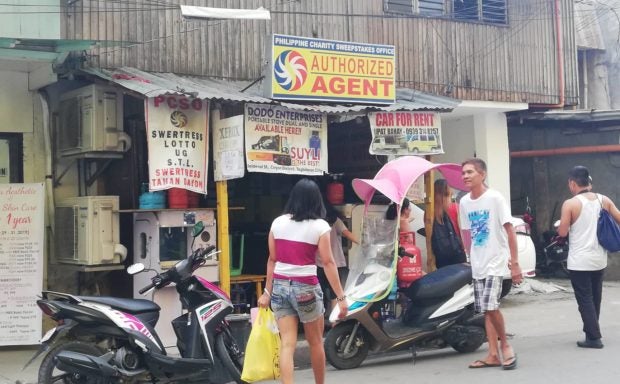 A PCSO Lotto outlet, which had been operating since 1999, was closed on Saturday, July 27, 2019, after President Rodrigo Duterte declared all PCSO gaming illegal. On Tuesday, July 30, the President lifted the suspension of Lotto operations. (Photo by LEO UDTOHAN / Inquirer Visayas)

“As per the advice of Executive Secretary Salvador C. Medialdea, the suspension of Lotto operations has been ordered lifted by the President,” presidential spokesperson Salvador Panelo said in a statement.

Panelo clarified, however, that other gaming operations of the PCSO — such as the Small-Town Lottery (STL), Keno, and Peryahan ng Bayan (PNB) — remained suspended.

“The rest of all gaming operations with franchises, licenses or permits granted by the Philippine Charity Sweepstakes Office (PCSO), such as Small-Town Lottery (STL), Keno and Peryahan ng Bayan (PNB), shall remain suspended pending the investigation of illegal activities and corrupt practices related thereto until the Office of the President evaluates the results of said probe,” Panelo said.

“Franchise holders and operators of Lotto outlets may now resume with their operations. The lifting of the suspension of Lotto operations takes effect immediately,” Panelo added.

In a text message, Medialdea said the lifting of the suspension came after investigators found no anomalies in the conduct of Lotto operations.

“Its sanctity remained untainted and regulatory rules followed,” he said.

Last Friday, July 26, the President ordered all gaming activities of PCSO, including Lotto, to be suspended amid the alleged “massive corruption” in the agency.

Following the order, Guevarra ordered the National Bureau of Investigation (NBI) to probe the alleged corruption within the agency.