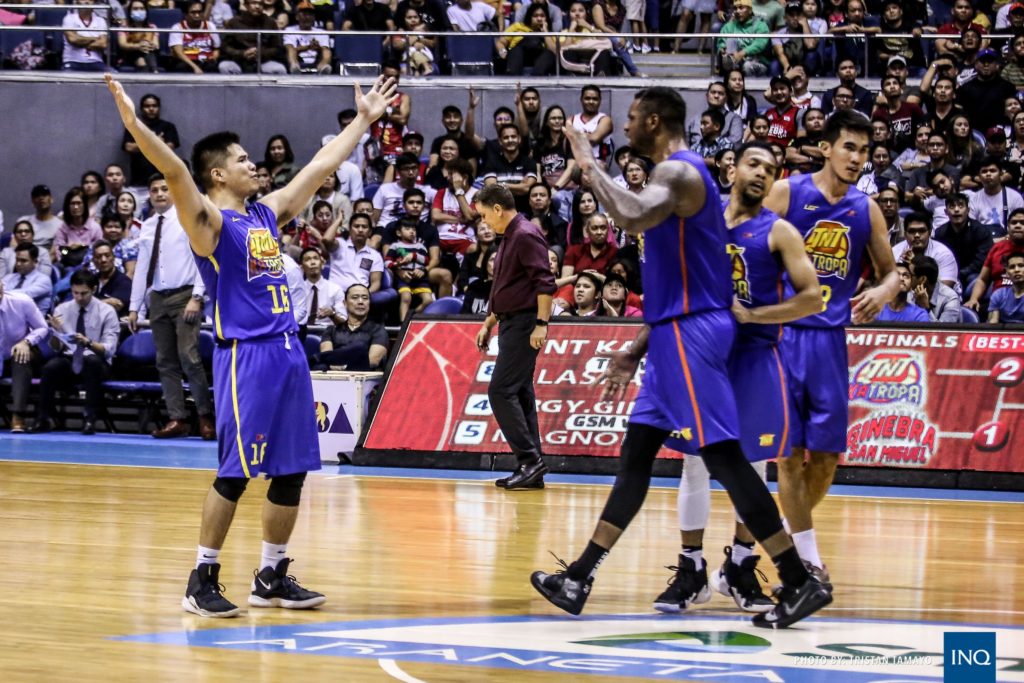 Cebuano RR Pogoy and the rest of the TNT KaTropa celebrate after winning over Ginebra in the PBA Commissioner’s Cup semifinals. | Inquirer photo

TNT had a man in front of every shooter and hands in the passing lanes in the second half. And after surrendering at least 30 points in each of the first two periods, the KaTropa held Barangay Ginebra to a total of 30 in the last two.

“We just stuck to our defense. It was our main concern—making stops,” coach Bong Ravena said.

Now they’re in the PBA Commissioner’s Cup Finals after dethroning the Gin Kings with a 103-92 victory Thursday night, August 1, 2019, at the  Araneta Coliseum.

TNT showed its defensive teeth down the stretch, turning a nip-and-tuck affair into a blowout with two killer runs in the second half.

Taking advantage of those stops, TNT rallied from eight down with a 23-6 run anchored on RR Pogoy, Terrence Jones and Brian Heruela to take an 86-77 lead in the third period.

Ginebra fought back in the fourth and Justin Brownlee hit a three that fired up the Gin Kings’ crowd and cut the deficit to 90-84.

But Jones, Heruela and Jayson Castro again took charge of turning every stop into a scoring opportunity and joined hands in a 13-2 exchange that put TNT ahead, 2:43 remaining.

But he wasn’t alone in making sure a new team will be crowned champion this conference.

“The local team stepped up, too,” added Ravena, who also drew 22 points from Troy Rosario and 20 more from Castro. Pogoy chipped in 14 more for the KaTropa.

Brownlee and Japeth Aguilar both scored 27 points and grabbed nine rebounds each for the Gin Kings, who were looking to forge a knockout game after trailing early in the series, 0-2.

Stanley Pringle finally got on a scoring groove while veteran Joe Devance reprised his hot-shooting night but none of them could solve TNT’s late defensive puzzle.

“As coach Mark (Dickel) would say, we’re off to the next stage. We’re just waiting for our next opponent,” said Ravena, whose charges now await the winner of the other Final Four contest between San Miguel Beer and Rain or Shine.

The Beermen, up 2-1 in the best-of-five series, try to finish off the Elasto Painters when they clash in Game 4 on Friday, August 2, 2019.