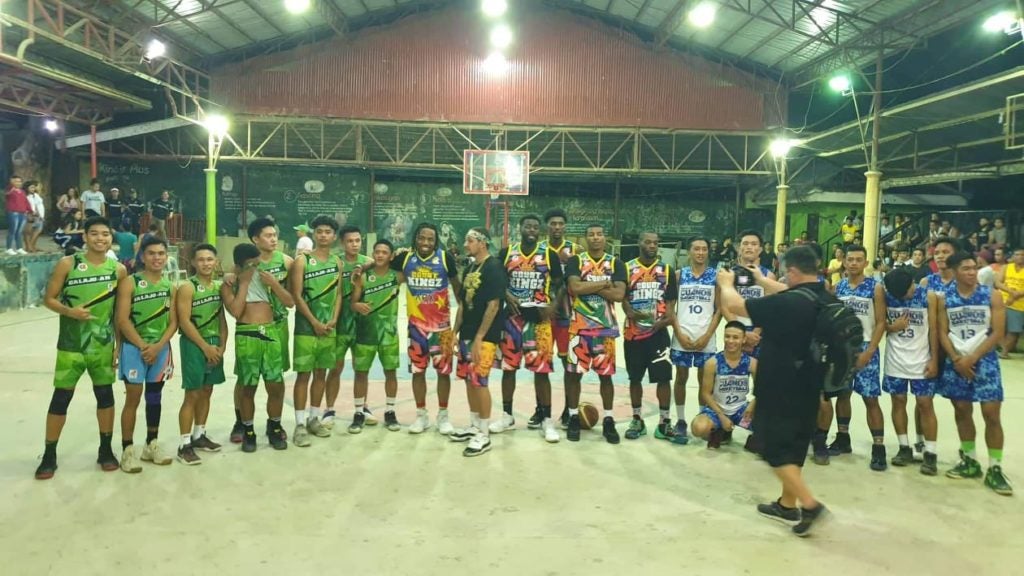 The Court Kingz with other local basketball teams in one of their stops in Lipata, Minglanilla, southern Cebu. | Contributed photo

Cebu City, Philippines—The Court Kingz have been very busy spreading their message of positivity to the youth and showcasing their brand of basketball after making stops in various towns and municipalities in Cebu.

The Court Kingz is a street basketball team that was founded by brothers Victor and Simon Martinez in 2004.

Since then, it has developed into a platform to positively impact the lives of people everywhere through the game of basketball.

The team arrived in Cebu last weekend and immediately went to work, crashing basketball courts in Tangke, Talisay and Lipata, Minglanilla as well as the municipalities of Tuburan, Medillin and Daanbantayan, where they have wowed crowds with their ball handling wizardry and high-flying slam dunks.

The Court Kingz will also be crashing courts all over Cebu City on Friday, August 2, 2019, before finally facing off against Cebuano hoops legend, Dondon Hontiveros and the Jump10 Philippine team in their much-anticipated match-up on Saturday, August 3, 2019, at 6 p.m. at the University of San Jose-Recoletos gym in Basak.

The CourtKingz Philippine stop is being organized by Apex Sports — a Cebu-based company that seeks to provide the Filipino athlete the right platform to showcase their skills.

Apex Sports’ Gene Noel Gallarde said that the Court Kingz have been well-received in every place that they have gone to.

“Immediate impact. No introduction is necessary once they put on a show with their dribble tricks and dunks. The kids go crazy. Streetball is alive in the Philippines.”

Aside from the Philippines, the Court Kingz have also brought their show to many different parts of the world including China, Malaysia, Taiwan, Bahamas, Ecuador, Venezuela, Dominican Republic.

Gallarde also narrated how impressed Martinez is with the skill level of some of the kids that they have played against in the provinces.

“Not only is he impressed about the reception of the people, he was also seeing first hand that streetball is alive and well in the Philippines as some kids showed their skills in dribbling. The true meaning of Court Kingz is to make an impact to the youth and that is happening to every single court they crashed.”

Ticket prices for the exhibition game on August 3 are set at P500 for courtside, P350 for the lower box and P200 for the upper box.