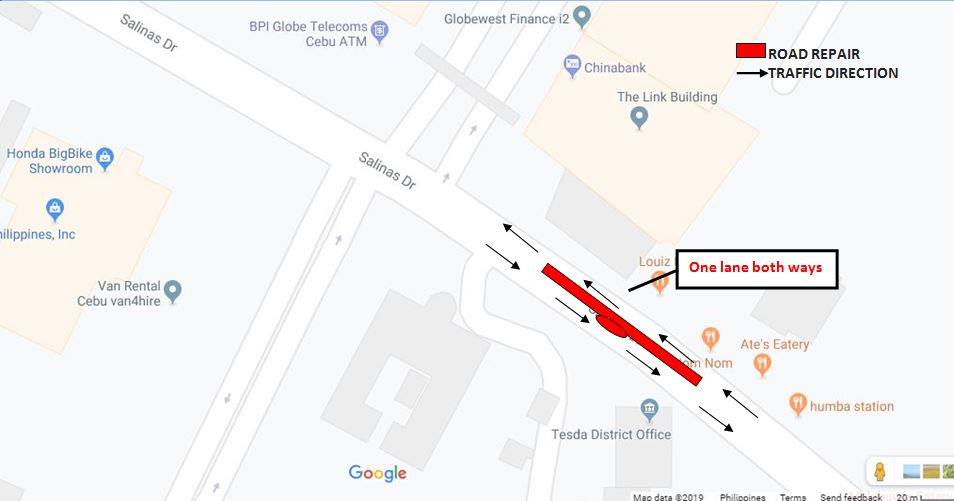 A drainage repair will be conducted in Salinas Drive in Barangay Apas, Cebu City, which is expected to cause two weeks of traffic congestion in the area. | Photo grabbed from Cebu City Transportation Office

CCTO Operation Head Andres Bayarcal said that the repair of the drainage would take at least two weeks to finish and this would be expected to create a bottleneck situation in the area.

Bayarcal advised the motorists to find alternative routes such as Gorordo Avenue and Archbishop Reyes Avenue to avoid the traffic congestion in Salinas Drive.

“We were given assurance that the repair will only run for two weeks, so we expect the traffic to ease in the middle of August,” said Bayarcal in a phone interview with CDN Digital on August 2.

The CCTO has also warned the contractor of the drainage repair that they will need to comply with the regulations of the Department of Public Works and Highways (DPWH) and the city’s regulations over repairs affecting main thoroughfares.

These include the putting up warning signages for motorists at least one kilometer away or along the nearest streets to the site of repair as a form of advisory to the motorists to find alternative routes.

Failure to put up signages may incur penalties from the city or even the cancellation of the contract.

Bayarcal also encouraged motorists to be patient as the drainage repair is needed to avoid flooding in the area./dbs