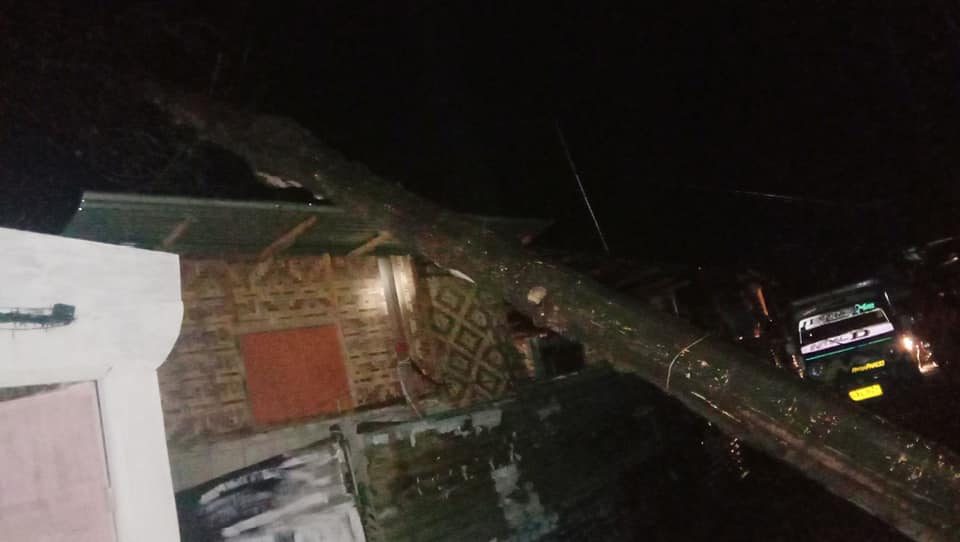 A tree fell into a home in Barangay Lawaan III in Talisay City while it rained Friday night, August 2./Photo from the Lawaan III Facebook page

CEBU CITY, Philippines – Two boys aged 12 and 3-years-old were trapped inside their home located in an urban poor housing community in Barangay Cansojong, Talisay City for about four hours after a “mansanitas” tree fell on their gate and caused the electrical connections in their house to spark.

(A tree branch hit the electric line and its weight caused the it to spark.)

Cansojong resident Fabular said that the “masanitas” tree broke while it rained and after strong winds blew in their area past 6 p.m. on Friday.  The tree stood beside the residence of Nilo and Edelyn Arnoco.

(The strong winds started to blow, we heard a very loud sound as if something broke.  The mansanitas tree broke.)

Fabular, who lives next to the Arnoco residence, said that only the two boys were left inside their home then. Their mother, Edelyn, was at work while their father, Nilo, was still driving his tricycle.

Edelyn is a cousin of Fabular’s wife, Joy.

Fabular said that he and some neighbors tried to rescue the two boys.  With the use of a bolo, they took turns in cutting the “mansanitas” tree that fell on the Arnoco’s angle bar gate into smaller pieces. Part of the tree also landed on the roof of the Arnoco residence.

(We took turns in cutting the tree into pieces because it was huge. The tree was big enough to be embraced by a human.)

Fabular said that they also called City Hall for assistance while he also sent a message to the Facebook page of Mayor Gerald Anthony “Samsam” Gullas Jr.

“Lots of unfortunate events (happened) last night in our city. (I) Received personal messages, calls, texts and other forms of communication about scary events that happened yesterday night, especially after the heavy rain and heavy winds,” Gullas said in a Facebook post this morning, August 3.

Barangay Lawaan III also posted on their Facebook page a photo of a tree that also fell into a house there.