Bohol dance pair shows how to have fun despite lacking practice 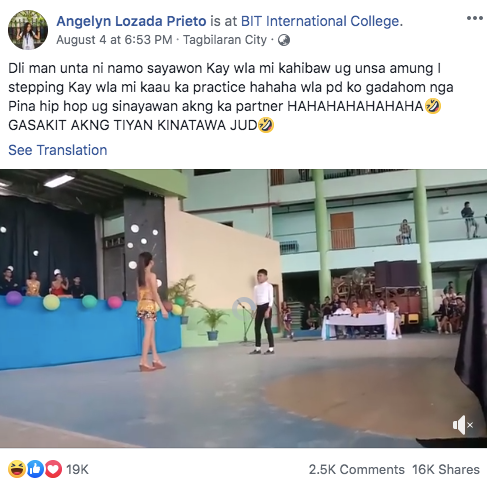 Cebu City, Philippines— A video of what was supposed to be a dancesport competition took a different turn when this pair decided to go out of the box.

WATCH: What would you do if you lack practice? IMPROVISE! Just like what this pair from the BIT International College in Tagbilaran City, Bohol did in their DanceSport competition held last Sunday, August 4, 2019. | via Immae Lachica (Video from Angelyn Lozada Prieto) #CDNDigital

The dancers in the video are Cristorey Vincent Cavalida, 16, and Angelyn Prieto, 17, from BIT International College in Tagbilaran City, Bohol.

According to Prieto, who shared the video on her Facebook account, the video was taken on August 4, 2019, during their basic education day “DanceSport” competition.

In the video, the pair is seen starting their performance with the usual Latin dance steps. A little later, Cavalida starts to go freestyling with some hip-hop moves and the crowd goes craze afterwards.

Was this planned? Prieto explains how this came about.

“My partner was not prepared at that time so we agreed to dance with our own stepping. Wala ko ga expect sa akong partner na musayaw ug pina hip-hop dance tungod kay it’s a Latin dance,” she said via Facebook messenger chat with this writer.

(My partner was not prepared at that time so we agreed to dance with our own stepping. But I didn’t expect that my partner would dance hip-hop dance because the competition is Latin dance.)

Prieto also explained why they had not enough time for practice.

“He was not really my original partner so that’s why we didn’t have enough time to practice. Plus, he plays volleyball, so we never really got that much time. But since I just wanted to represent my team, I went on and just went with his flow,” said Prieto.

Turns out having little practice didn’t end up bad for both Prieto and Cavalida as they went on to cheer up the spectators of the competition and also the online community.

The video uploaded by Prieto has already 16,000 shares on Facebook and has been receiving a lot of comments.

As expected, the pair didn’t stand a chance against their competitors on that day but didn’t seem to matter for Prieto.

“We did not really expect anything because we danced hip-hop instead of  Latin. But we had a lot of fun,” she said.

And you’ve created quite a splash on the online world. Congrats for that! /bmjo

Read Next
Man shot near creek in Sambag 2