A change of guard in the Agriculture Department

It is not everyday that one, not in the public sector,  witnesses the changing of guards in one of the most important cabinet portfolio – the Department of Agriculture.  This columnist is honored to be invited during the turnover ceremony last Tuesday, August 13,  that formally installed Dr. William Dollente Dar to head the country’s Agriculture Department. The venue was full-packed and the mood was festive and celebratory. A feeling of hope pervaded that agriculture sector, which includes farmers, fishers, domestic and export-oriented business enterprises, will rebound from its “critical stage.” It has grown a measly one percent, in the past decade, according to Acting Secretary Dar. 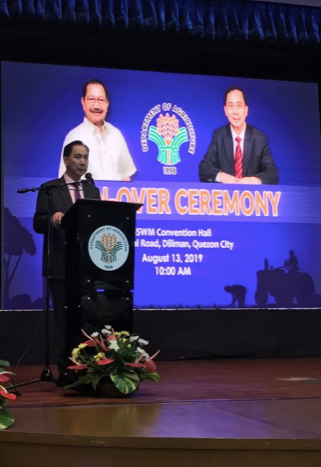 A recipient of several awards both here and abroad, Acting Secretary Dar is a technocrat, knows the problems hounding the agriculture and fisheries  by heart and has the experience, passion and energy to go for management interventions  that are inclusive, science-based and climate smart.

Under the Administrative Code,  Department of Agriculture is the government agency tasked to promote agricultural development by providing the policy framework, public investments, and support services needed. Its primary concern is to improve farm income and generate work opportunities for farmers, fishermen, and other rural workers. It shall encourage people’s participation in agricultural development through sectoral representation in agricultural policy-making bodies so that the policies, plans, and programs of the Department are formulated and executed to satisfy their needs.”

In the country, however, farmers and fisherfolk are considered the poorest among the poor. We have more than 7,600 islands, a center of the center of marine biodiversity, but our natural wealth has not spread to our fishers and farmers. With climate change already making them more vulnerable, a lot needs to be done to ensure that they are uplifted from their condition and for the agriculture sector to thrive and be globally competitive.

Heart-warming was his instruction to the bureaucracy to “re-boot,” perform tasks with integrity and dedication or “be booted out.” He wants a strong and effective team that delivers services with a smile.

We are hopeful that with the support and participation of stakeholders, especially with local government units, and the establishment of provincial agricultural extension system nationwide, among a host of urgent measures, his vision of a two percent growth for the first year and the farmers and fisherfolk lifted out of poverty in five years, and a food secure nation will become a reality.