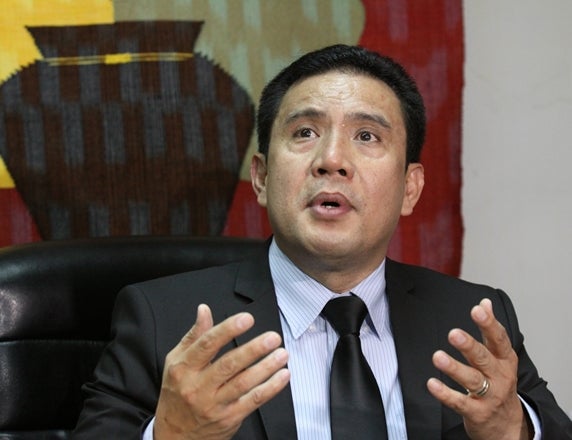 Lawyer Inocencio Dela Cerna appeals to the public not to prejudge the four members of the PNP Highway Patrol Group implicated in the ambush-slay of lawyer Noel Archival, saying they are not even considered as suspects yet.

DON’T judge them yet.

This was the plea of lawyer Inocencio Dela Cerna, counsel of the four policemen implicated in the ambush-slay of lawyer Noel Archival and his two aides.

In a press conference, Dela Cerna expressed dismay over the people’s prejudice towards his clients. He also hit as unfair the refusal of the court and the National Bureau of Investigation (NBI) to provide them with copies of the affidavits and other evidence that linked them to the crime.

“Don’t construe their silence as an admission of having committed a crime. There has been no case filed against them for now. However, my clients have been already judged guilty by the public,” he said.

He clarified that his clients cannot even be considered suspects.

“Let us be fair. Let us not be hasty in saying that my clients are the suspects just because their names appear on the search warrant. What was the product of that search? A car, period.

Remember, a car, or a trisikad, or a horse cannot fire shots at anyone. Only human beings can do so,” the lawyer added.

Dela Cerna said they want to know the basis of the NBI in concluding that Supt. Romualdo Iglesia, Senior Insp. Eduardo Mara, Senior Insp. Joselito Lerion and SPO4 Edwin Galan were directly involved in the murder of Archival and his two aides when what the closed-circuit television (CCTV) footage disclosed were just the two vehicles used by the perpetrators in attacking the victims.

He said they have requested Executive Judge Soliver Peras of the Cebu City Regional Trial Court, who issued the search warrant, as well as the NBI to give them all the evidence used as basis in impleading the four policemen.

However, both Peras and the NBI refused to heed his request.

“We are facing a blank wall for the moment. We cannot address some of your questions because how can we do so if we don’t have a copy of the complaint, affidavits and supporting documents. Give my clients their day in court. We ask for nothing more. Just allow us to meet the issues head on,” Dela Cerna said.

The lawyer said there is no need for his clients to submit their respective affidavits before the NBI or present any evidence to prove their innocence, saying it is useless.

“This (NBI investigation) is a fishing expedition. If the NBI indeed has a (strong) case, they should not have sought for the issuance of a search warrant. They should have directly filed a case. Of what use is the NBI investigation? It will not clear my clients because the bureau has no authority to clear a person (accused of an offense). That has never been the case,” Dela Cerna said.

His clients—Iglesia, Mara, Lerion and Galan—were served with subpoenas by the NBI for them to answer the accusations against them. None of them had complied so far.

Contrary to rumors, the lawyer said none of the four policemen have left the country and that no one will turn state witness.

Although Iglesia, hasn’t been seen at his office recently, Dela Cerna said, the chief of the HPG-7 and his three other clients are reporting for work.

“Supt. Iglesia doesn’t have to punch in (to prove he’s present). If he could not be seen at the office, probably he has been attending to official business,” said Dela Cerna who met with his four clients yesterday morning.

He said his clients are willing to submit their respective firearms for ballistic examination to determine whether or not these were the same weapons used in killing Archival two companions.
Dela Cerna said Iglesia has created a task force within the HPG-7 to conduct an investigation on the slay of Archival.

Read Next
Garcia: Rules not followed