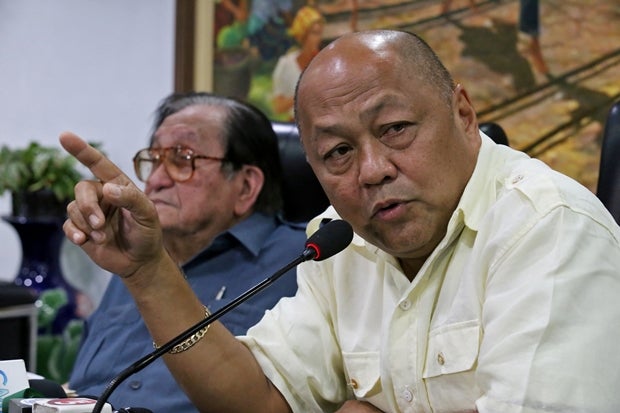 Dumanjug Mayor Nelson Garcia fields questions from the media as his father, former governor and congressman Pablo Garcia, listens. The Garcia camp claims that the Provincial Board erred in recommending his suspension.

Dumanjug Mayor Nelson Garcia yesterday said he will appeal for a reversal of the recommendation of the Cebu Provincial Board to have him placed on preventive suspension over charges of abuse of power and usurpation of authority.

In a press conference, the mayor’s father, former governor and congressman Pablo “Pabling” Garcia, questioned the recommendation, saying the committee on complaints and investigation, did not follow proper procedures in hearing an administrative complaint.

He said the committee, headed by PB Member Arleigh Sitoy, failed to prove that his son is liable.

Last Monday, Sitoy presented his recommendation, saying that the Dumanjug mayor “did not deny” having appointed the secretary of the municipal council, an act Sitoy said oversteppedthe mayor’s bounds since the authority rests with the vice mayor under the Local Government Code.

The PB voted 8 in favor with three abstentions to approve the committee recommendation addressed to Gov. Hilario Davide III.

It can be imposed if “issues are already joined, the evidence of guilt is strong, the offense is grave in nature and the probability is great that the respondent’s continuance in office can influence the witnesses” of the case.

Pabling, a three-term governor of the province, criticized the committee for “rushing the suspension”.

He said the committee never called for a hearing of the case in violation of committee rules of the PB f crafted and ratified in 2009.

“It is only after a thorough investigation that the committee can recommend a suspension to the governor,” he told reporters.

During Monday’s regular session, Sitoy released his committee report recommending a 60-day preventive suspension on Mayor Garcia for appointing the secretary of the Sangguniang Bayan (municipal council), a power vested on the vice mayor , Guntrano ‘Gungun” Gica, who is the presiding officer of the local legislature.

Garcia reportedly released a memorandum designating Cabonilas to take over in an acting capacity the post vacated by Victor Tan Jr. who resigned last June 26.

Governor Davide has yet to make a decision on the case.

He was in Manila yesterday to attend a Senate committee hearing concerning the Mactan-Cebu International Airport expansion row with.

Garcia said he believes that Davide “would not sacrifice his ideals for his party,” saying the governor has treated officials affiliated with the One Cebu party fair and square in the past.

“I trust Gov. Davide. The first time I met him, he treated me well. I think he will not be carried away by his party mates and decide fairly on the matter,” said Nelson.

Liberal Party members in the board voted to affirm the recommendation of a 60-day preventive suspension.

Three PB members Joven Mondigo Jr., Sun Shimura and Alex Binghay who are all members of the Garcias’ One Cebu Party abstained.

Nelson said he “cannot expect justice from the PB with an LP majority.”

He said Sitoy was “pressured by Cebu Vice Gov. Agnes Magpale” to craft the recommendation, as part of the LP’s ploy to run after One Cebu officials in the whole province.

Sitoy quickly dismissed the allegations yesterday and said it was a burden for him to recommend the suspension since he and Garcia were close friends since their childhood days.
However, Sitoy, who represents the 6th district, said he had to implement the law for the complaint to be justly resolved.

“My loyalty to the party and politics weighs less than my loyalty to a friend. I value the friendship more. But I had to hand the suspension and let the supremacy of the law prevail even it pains me so much,” he told Cebu Daily News.

He also assured Garcia that due process will be followed.

“It was just a preventive suspension. We will still continue with the investigation and I promise him (Garcia) that we will treat this case fairly. The party does not even have a say,” said Sitoy.

In return, Garcia filed charges of graft and grave misconduct against the six members of the committee for ignoring a separate administrative complaint he filed against Gica last January.