Goliat on Daan’s death: We lost a father, a mentor, an icon 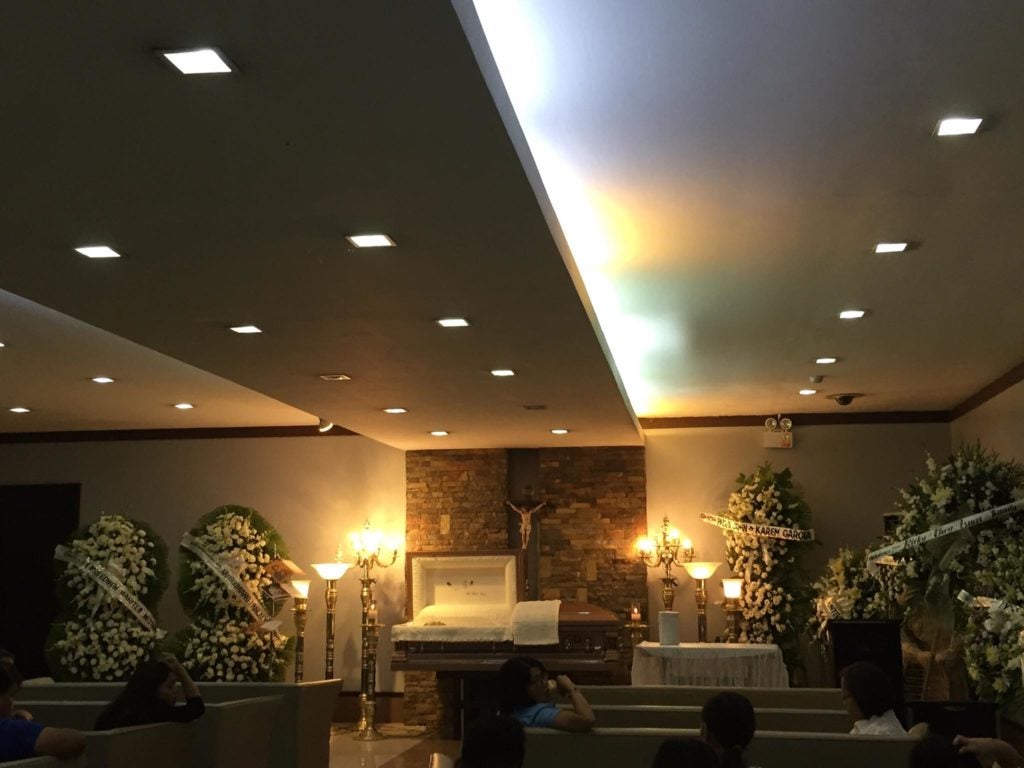 Flowers from colleagues and friends adorn the coffin of radio and stage personality Julian “Teban” Daan, an incumbent councilor of Talisay City and a former Cebu Provincial Board member, at his wake at the St. Peter Chapel in Imus Road, Cebu City in this photo taken on August 22, 2019. / CDND Photo / Rosalie O. Abatayo

CEBU CITY, Philippines — Julian “Teban” Daan dished out Cebuano humor like no one could.

It was his popularity as the other half of the comedic “Teban and Goliat” duo that also brought him to the world of politics and public service.

Known to his fans as Teban Escudero, Daan was a renowned radio and stage playwright, actor and director.

For Allan “Goliat” Nacorda, Daan’s protegé and sidekick of 39 years, Daan was a father and a pillar in the local radio and stage production scene.

Daan succumbed to heart failure while confined at a private hospital in Cebu City on Wednesday afternoon, August 22. He was 74.

He is survived by his wife Yoly, an incumbent PB member, sons Rodel and Lester and their spouses, and five grandchildren.

Yoly, who was also hospitalized due to dengue fever, was discharged only today, August 22, from the same hospital where her husband died.

(It is very painful to lose Noy Teban. He is a loss to both the radio industry and politics because he was one of a kind. There is no other like Noy Teban.)

Nacorda said he grew up listening to Daan and admiring his radio shows since the latter was with dyRC up until Daan moved to dyHP in 1976 for the drama “Ang Manok ni San Pedro.”

It was in 1980 when the then 13-year-old Nacorda worked with Daan for the radio drama “Teban loves Lorna.”

Nacorda said Daan, whom he fondly calls “Pa Django,” was his second father who built who he is now.

(I’ve been his listener since I was a child . He built me as his sidekick. It is very painful for me that the person whom I looked up as my second father is now gone. He stood as my father when I entered the radio drama industry at the age of 13. He fed me when I was only earning P10 back in the 1980s. He was my mentor and the reason that I become the Goliat that I am today.)

Nacorda recalled that “Teban Loves Lorna was first project with Daan in 1980. Their tandem, lasting for 39 years now, produced other hits like “Goat the Wonderful” and “Milyonaryong Mini.”

Nacorda said the 74-year-old icon left behind a legacy of a welcoming and warm attitude that had made him well-loved among Cebuanos.

Nacorda said the people’s love for Daan was evident in how they voted for him during elections even if he did not often attend his campaign rallies.

Daan started his political career In 1982 when he ran for barangay councilman in his home village of Tabunok in the then town (now city) of Talisay.

He was first elected as Provincial Board (PB) member in 1995 and served for three terms until 2004 when he lost in the Cebu vice gubernatorial race against the late former vice governor Gregorio Sanchez.

In 2007, he ran for board member representing the first district and served for another three terms until 2016.

He ran for city councilor of Talisay in 2016 and was reelected in the May 2019 elections as number one councilor.

Among those who mourned Daan’s demise were his colleagues in politics.

Vice Governor Hilario Davide III, who was governor in 2013, extended his condolences to Daan’s family.

“Teban was well-loved by the Cebuanos not only for bringing joy and amusement to thousands of households through his radio and TV programs but more importantly through his faithful and selfless service to his constituents. We shall miss him,” Davide said in a statement on Thursday, August 22.

Former Cebu PB member and now Daanbantayan Mayor Sun Shimura said he would always cherish their laughing moments as members of the 12th and 13th Sangguniang Panlalawigan (Provincial Board).

But beyond politics and entertainment, Daan is most loved by family members who saw his generous heart.

For Annabelle Oliva, Daan’s sister-in-law, Daan’s goodness “has no match in this world.”