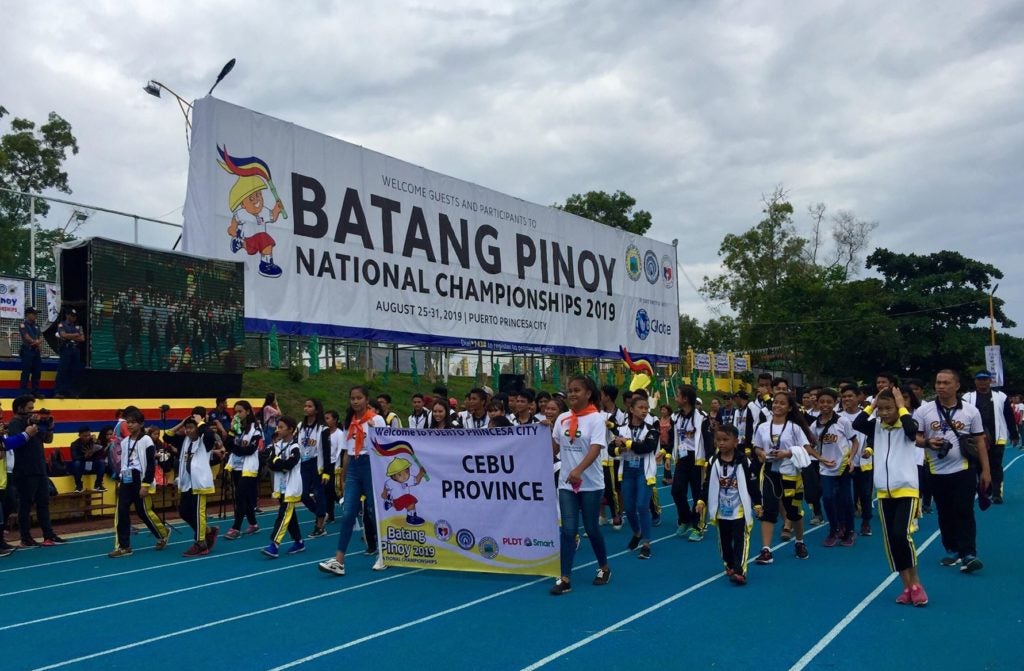 The lean team of Cebu Province marches during the opening of the Batang Pinoy National Championships in Puerto Princesa in Palawan on Sunday, August 25, 2019. CDN Digital photo | Mars G. Alison

The 89 members of the delegation, using uniforms issued to them during the Regional Championships last March in Iloilo, were accompanied by just their coaches on opening day while other teams had their delegation heads with them.

Still, the athletes marched with heads held high and smiles on their faces.

Some 210 athletes representing the Cebu Province qualified for the National Championships but some of them opted not to go because there was no funding for them.

“We will still do our best. We will show them that we can do it,” said karatedo coach Manuel Aloba, Jr.

Aloba said none of them would have made it here if it weren’t for the intervention of commissioner Ramon “El Presidente” Fernandez of the Philippine Sports Commission (PSC).

Aloba said that after the change in the Cebu Province administration following the midterm elections, he approached the new administration several times for their Batang Pinoy National Championships participation.

This he did because there was no one else appointed to the Cebu Provincial Sports Commission (CPSC), which used to take care of the Cebu Province delegation to the Batang Pinoy competitions.

(They told me to write a letter of request but it was denied. So, that was when I sought the help of sir Mon.)

Fernandez then paid a courtesy call to Cebu Province Governor Gwen Garcia, who then agreed to send a delegation to the national championships.

Cebu Province chose to send all gold medalists plus the silver medalists in individual events. They paid for the transportation of the delegates to Puerto Princesa. They also gave a P5,000 cash allowance to the athletes excluding the coaches.

The 89 delegation, however, did not include the 24 futsal players and two coaches.

According to Lopez, the futsal teams were cut out because of budget constraints and their coach did not show up to the meeting. He added that the list for the national championships was prepared by athletics coach Francis Berizo.

The futsal teams manned by players from the Don Bosco Technical College (DBTC) are the defending national and regional champions in the Under 13 category and bronze medalists in the Under 15 category.

They had their best finish in this year’s regional championships in Iloilo when they placed third overall with a medal tally of 38-38-52. /bmjo