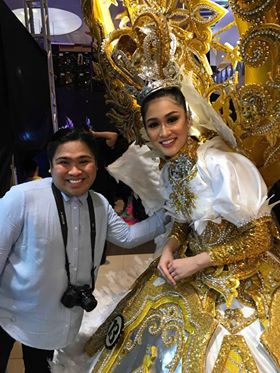 Rabie Ian  Pogoy, owner of Shutter Model and Management, released his official statement through a Facebook post on August 31, Saturday.

“I am saying this once and for all to end those malicious accusations. It is quite unfair that judgments had been made even without hearing our side,” Pogoy said in his statement.

But on the first week of April, just when Borromeo was already preparing for Miss Teen Philippines pageant set for May, a  last-minute decision was made to send Borromeo for Reyna ng Aliwan 2019 even if the deadline for submitting the forms was over.  Borromeo went on to win the Reyna ng Aliwan 2019 title during the coronation night held on April 28.

Pogoy  also claimed that he, together with John Michael Pepito, a representative from Sinulog Foundation Inc. (SFI), and Ricky Ballesteros, former executive director for SFI, raised their concern regarding the policy of the Reyna ng Aliwan  organizers to disallow their winners from join other pageants.

But a few days before Borromeo was to join Reyna ng Aliwan, Pogoy claimed that a certain “Jerecho,” a staff from Aliwan reached out to them to say there was no objection to her joining Miss Teen Philippines.

“We were informed that Nicole could still join since other candidates also raised the same concern,” he said.

“We were very happy to be part of it since Aliwan Fiesta is a grand event in the Philippines and a chance for Cebuanos like us to showcase to the world that we continue to celebrate Sinulog Festival,” Pogoy said.

To recall, Borromeo did not just receive the Sinulog Festival Queen 2019 title last January.  She was automatically named Miss Millennial Cebu 2019, which made her the official representative for Cebu in Eat Bulaga!’s  Miss Millennial Philippines 2019.

The sashing was done by Eat Bulaga!’s hosts Maureen Wroblewitz and Ryan Agoncillo during the Sinulog Festival Queen pageant held at the Cebu City Sports Center.

“I hope they would also understand that Nicole as the Sinulog Festival Queen 2019 has other duties to fulfill especially for the Cebuanos,” Pogoy said.

There were others, too

He also claimed that it was not just Borromeo who signed a contract with the Reyna ng Aliwan organizing body but all the candidates, as part of the contest process.

Aside from Borromeo, there were other Reyna ng Aliwan 2019 candidates who joined another pageant, he added.

“Sadly, signing that waiver has become an issue and used against us. I could still recall that Jericho said (that) if Nicole would win, what matters is she could fullfill her duties and she could turn over the crown (to her successor),” Pogoy said.

Sometime in May 2019, Pogoy claimed that the Aliwan Fiesta board had a meeting regarding Borromeo’s status.

A lawyer allegedly called Pogoy and asked him and Borromeo to choose between Reyna ng Aliwan 2019 crown and joining Miss Millennial Philippines 2019.

He said they talked for 30 minutes and he considered it as a difficult moment since they were asked to immediately decide.

“Tumaas talaga ang boses ko. Na high blood ako. Pinakalma talaga nila ako. I do not know what to say at all. I could recall how our team put so much effort for Nicole’s Reyna ng Aliwan 2019 stint,” he said.

Pogoy said he could not still understand why this has become an issue to the Reyna ng Aliwan organizers when this has been raised even before they joined the competition.

“If you preach about integrity and word of honor, I hope you also practice it even if we agreed on it verbally,” he added.

The Reyna ng Aliwan organizers were also informed that Borromeo was going to fullfill her duties and to join  Miss Millennial Philippines 2019.

The decision to join Miss Millennial Philippines 2019 was also supported by Borromeo’s parents.

They even considered the possibility of Borromeo postponing her entry to Miss Millennial Philippines  to next year but it was not possible since a new Sinulog Festival Queen will be crowned by then and will have to represent Cebu in the national competition.

“So that happened, we decided to join Miss Millennial Philippines 2019. It is now or never,” he said.

Borromeo also reached out to Susan Arcega, the media press release consultant of Manila Broadcast Company (MBC), which organized the Aliwan Fiesta, a gathering of all festivals in the country held every April in Pasay City, in partnership with Pasay City, Manila City, and the Cultural Center of the Philippines (CCP).  One of its activities is the search for Reyna ng Aliwan.

However, he said, they only learned that the organizers of Reyna ng Aliwan held a press conference on August 28 to announce that Borromeo has been dethroned and that Roi Neeve Comanda of Baguio City has been named as the new Reyna ng Aliwan 2019.

“Nicole was crying sobrang iyak niya sa exit area ng hotel at buong araw at gabing tulala and all I could do was to hug her and tell her to look at the bright side,” he said.

(Nicole was crying all day; she was sad. All I could do was to hug her and told her to look at the bright side.)

Pogoy said if they just knew this was going to happen, they would not have joined Reyna ng Aliwan 2019.

He said Sinulog Festival Queen 2019 first runner-up Ciairha Monsanto, who happens to be Pogoy’s model, could have represented for the Sinulog Festival in the Reyna ng Aliwan 2019 pageant. He said it would still have been okay if the  Sinulog Foundation Inc.  sent another another representative to the Aliwan pageant.

“As a matter of fact, we would even take it as an opportunity for Nicole to prepare for Miss Millennial Philippines 2019,” he said.

Pogoy clarified that he has nothing against Comanda because she has been good friends with Borromeo even during their Miss Silka Philippines 2017 stint. The two were also roommates during their Reyna ng Aliwan 2019 journey.

“We are very happy with her new milestone and we wish her well in her reign,” Pogoy ended his post.

CDN Digital has been reaching out to Aliwan Fiesta page since August 28, Wednesday.

On the evening of August 31, Arcega replied to CDN Digital and said, “I will have to refer you to the corporate officers on Monday.  I have informed our VP, Admin. Will wait for the advice.” /elb