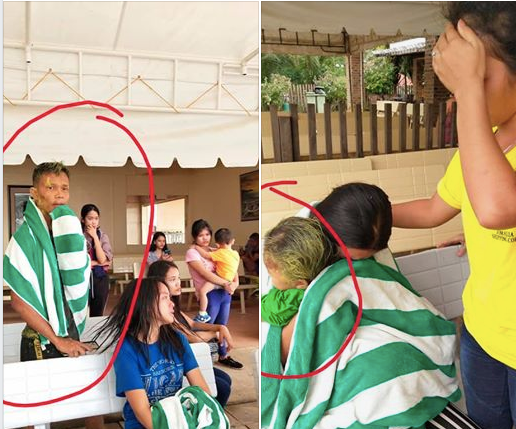 CEBU CITY, Philippines — The news reported about four passengers and 18 crew members who were rescued on August 31 after MV Mika Mari 8 tilted sideways shortly after the vessel arrived at the Consuelo port on Camotes Island.

But only a handful of people knew about the heroic deed of the boat’s apprentice, McJeno Vilches Gania, for saving a one-year-old child in the panic that ensued after the vessel tilted sideways.

Gania’s story of heroism was only made known to the public when one of the boat passengers, Jamyca Nudalo, posted photos on her Facebook account. The photos are of Gania, the one-year-old boy named Ljee and his mother.

In her post, Nudalo shared the details about what happened.

READ: 22 rescued from a troubled ship docked at Consuelo port on Camotes Island

Nudalo said the boy was traveling with his mother and his three-month-old sibling.

When the boat listed to its side, the boy’s mother was not able to grab and rescue Ljee because she was also holding on to the baby.

“When the boat tilted sideways,  Ljee got separated from his mother. When the apprentice saw what was happening, he immediately grabbed the child and used his body to cover the child so the boy won’t be hit by any of the cargoes that were dislodged,” said Nudalo.

Nudalo said she was also on her way to her hometown in San Francisco, Camotes Island, when the accident happened.

Gania lost a tooth as some of the cargoes knocked him down.

But the modern-day hero managed to get up and brought Ljee back to his mother.

Witnessing how Gania made sure that the boy was safe brightened up Nudalo’s day despite the traumatic accident.

Later that Saturday, August 31, she posted the photo of Gania whose upper body was wrapped in a green-and-white towel. She also posted another photo of Ljee who was hugged his mother.

Thanks to the heroism and bravery of McJeno Vilches Gania, Ljee came home to the embrace of his mother! / celr