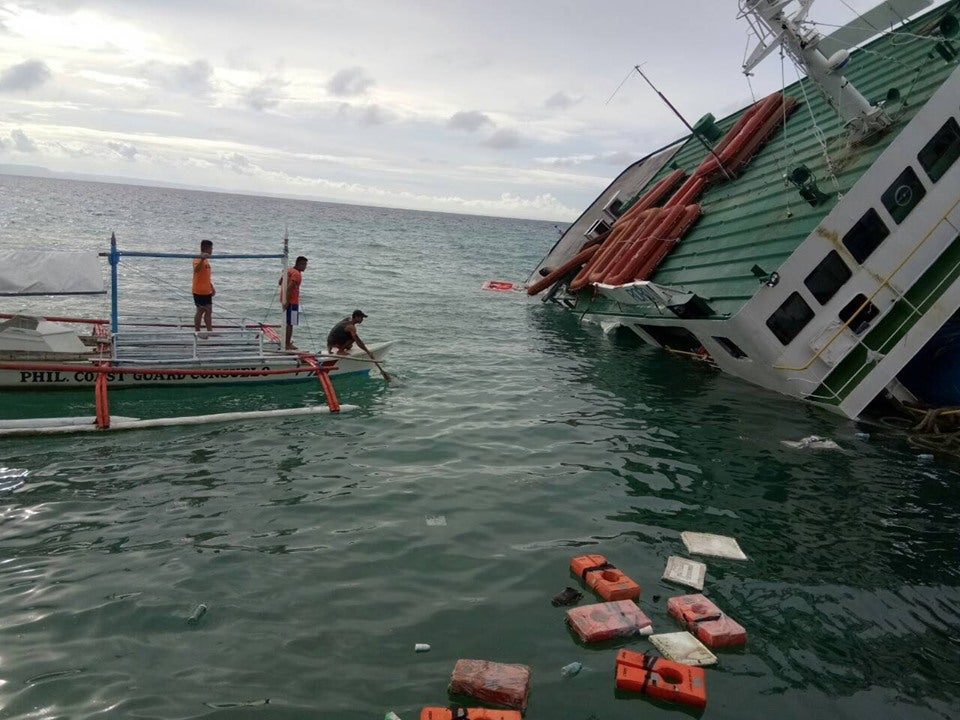 The MV Mika Mari 8 tilts sideways shorty after it arrived at the Consuelo port on Camotes Island and while a truck loaded with cement was being maneuvered out of the vessel on August 31, 2019. | Photo from PCG Central Visayas District

CEBU CTY, Philippines —  At least four passengers and 18 crew members were rescued by the Philippine Coast Guard from a boat that began to sink soon after it docked at the Consuelo Port on Camotes Island, Cebu at 2:27 p.m. today, August 31, 2019.

The 22 persons still on board the vessel, MV Mika Mari 8 of Jomilia Shipping, had to be rescued after the boat  listed to its side and started to take in water just as a ten-wheeler truck loaded with cement was getting out of the ship, said Lieutenant Junior Grade Michael John Encina, public information officer of the PCG in Central Visayas (PCG-7).

MV Mika Mari 8 was carrying 149 passengers, 18 crew members and 11 rolling cargoes when it arrived at the Consuelo port in San Francisco town on Camotes Island. The bot came from Danao City in mainland Cebu, said Encina.

Fortunately, most of the passengers have already disembarked when the ship started to sway and eventually tilted towards its left side. The four passengers who were yet to leave the ship sustained minor injuries as they were assisted out of the sinking ship, Encina said.

All of the boat’s 18 crewmen were also brought out to safety, he added.

Based on PCG-7’s initial investigation, MV Mika Mari 8 began to list when a 10-wheeler vehicle loaded with 800 sacks of cement was maneuvering to disembark from the vessel. There were also three other privately-owned vehicles that were still inside the vessel, said Encina.

(While this truck was maneuvering to get off the vessel, it went off balance causing the vessel to also lost its balance.)

The four passengers who sustained minor injuries were brought to the Ricardo Memorial Hospital in San Francisco town for treatment, said Encina.

According to Encina, the management of Jomalia Shipping was already directed to file a marine protest to explain why and how the accident happened.

This was the second time that a vessel owned by Jomalia Shipping was involved in a mishap.

In July this year, a truck loaded with corn grits fell into the water of the Danao City port when the mooring line of MV Mika Mari 7  snapped due to the alleged heavy weight of the truck. /elb