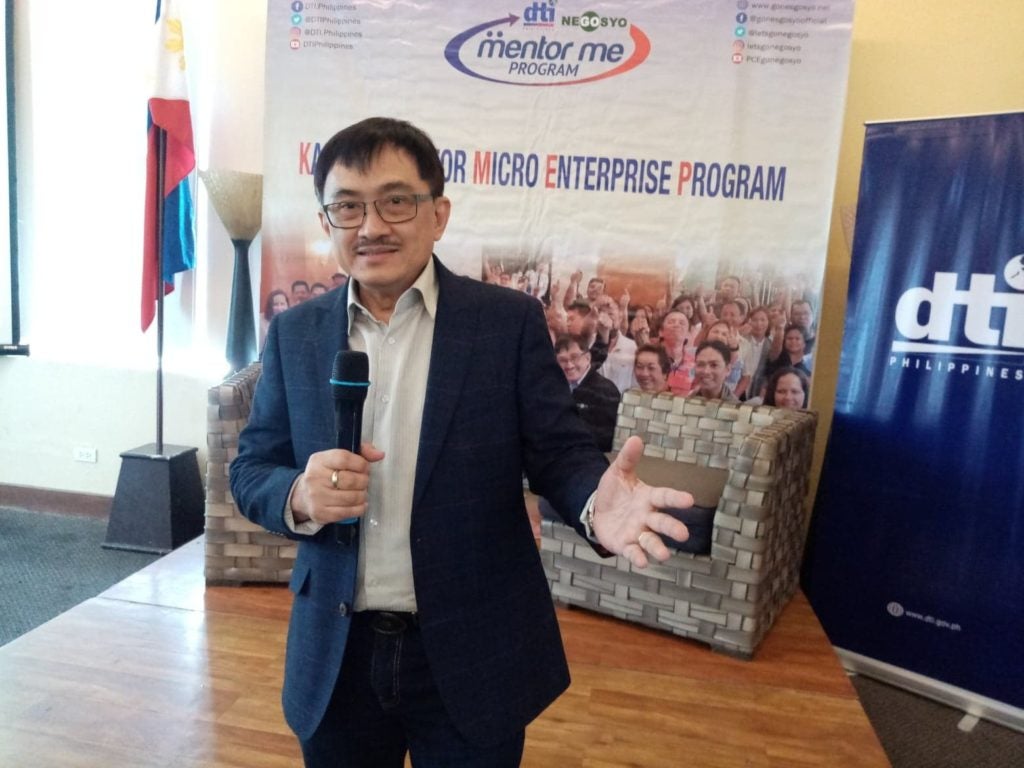 Cebu Chamber of Commerce and Industry (CCCI) president Virgilio Espeleta speaks during the launching of the 7th batch of Kapatid Mentor Me (KMME) Program on Sept. 5, 2019 at the Azia Suites and Residences on Rahman St., Cebu City. |CDND Photo/Irene R. Sino Cruz

CEBU CITY, Philippines  — Cebu Chamber of Commerce and Industry (CCCI) president Virgilio Espeleta urged the participants in the 7th batch of Kapatid Mentor Me (KMME) program to take advantage of the knowledge they acquire during the 10-week mentoring sessions to become successful.

“We have been doing this since 2016, not only as a chamber because this is a joint effort,” said Espeleta, who had been with Go Negosyo since 2006.

The Department of Trade and Industry (DTI), CCCI and the Philippine Center on Entrepreneurship-Go Negosyo (PCE-GN) jointly implement the KMME program. DTI-Cebu launched its KMME 7th batch on Thursday, September 5, 2019, at the Azia Suites and Residences along Rahman Street, Cebu City.

Espeleta considered the KMME program, a modular concept of helping business owners, a well-thought out program funded by DTI.

The present DTI secretary, Ramon Lopez, used to be with Go Negosyo, he added.

Espeleta cited several examples of KMME graduates who had succeeded in expanding their business after they completed the program.

One of these businesses, he said, is Lemon Co., which only had three outlets when its owner decided to join the KMME program. Now, it has 25 outlets.

TUF Barber Shop, another successful KMME graduate, started with only four outlets but now has 11 outlets, Espeleta pointed out.

A.T.E Clothier, a women’s clothing store, only had single branch in Cebu before KMME. It has since opened two more boutiques in Cebu and another one in Manila, he added.

According to Nanette Arbon, DTI Central Visayas assistant regional director, the Cebu KMME program has produced a total of 160 mentee-graduates since its inception in October 2016.

After the launch, DTI proceeded to the program’s first module — the Entrepreneurial Mindset and Values.

Noted Cebuano businessman Bunny Pages was among the mentors for this module.  Pages told the mentees that it would take a lot of hard work to attain success. Entrepreneurs, he added, should remain on their toes to survive challenges and competition.

The KMME 7th batch has 29 mentees engaged in different businesses, like wearables and homestyle, processed food, tourism, health and wellness, and construction, among others./elb

Read Next
First in Cebu: Convict freed through GCTA surrenders to police in Bogo City