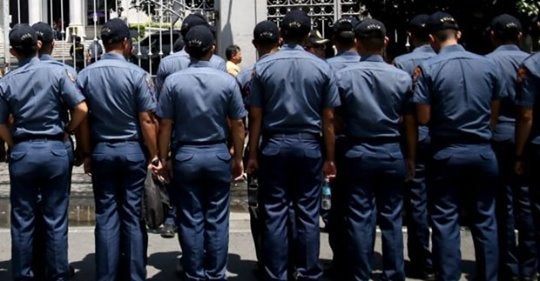 MANILA — A majority of police officers involved in operations that killed more than 6,000 suspects in President Duterte’s war on drugs since 2016 have not been criminally charged, the Philippine National Police told House members on Friday.

Only 103 officers have been been charged in court and 150 others have undergone an inquest, lawmakers were told during the House deliberations on the 2020 budget proposal for the Department of the Interior and Local Government (DILG). The DILG supervises the PNP.

The total of 253 officers facing criminal liability in the drug war killings was less than half of the 594 policemen slapped with administrative charges in connection with the antidrug operations, according to official police records cited during the budget debate. A criminal offense is usually accompanied by an administrative charge.

Over the same period, five officers entered into an amicable settlement with their accusers, while 14 are still under investigation, the PNP said.

This figure was smaller than what was cited in June by PNP chief, Police Gen. Oscar Albayalde, who said 6,600 have been killed in antidrug operations as of May.

Bayan Muna Rep. Carlos Zarate, a member of the minority Makabayan bloc, criticized the discrepancy in the PNP’s own statistics.

“Those figures cannot be trusted,” he told Vargas, a vice chair of the appropriations panel tasked with defending the DILG budget.

Under House rules, officials of agencies whose budgets were under consideration may not directly address the body, hence, the respective sponsors must speak for them during debates.

The Makabayan lawmaker quizzed Vargas on the number of policemen who were charged in the deaths of drug suspects.

Citing the case inventory of the PNP’s Internal Affairs Service (IAS), Vargas said 594 officers have been “charged” in connection with the killing of suspected drug offenders as of July this year.

But he later clarified that “as of now, these policemen are only facing administrative charges.”

With Zarate pressing his inquiry, Vargas finally said only 150 officers had been brought to an inquest prosecutor on charges of killing a drug suspect, while 103 had been charged in court.

“Let’s go over this one by one, according to the PNP manual, at every chance there is a police operation, there must be an inquest proceeding when somebody is killed … now you’re saying only 253 have ever faced inquest?” Zarate said.

“What is the penalty for police officers who do not comply with the PNP manual?” he asked.

Vargas did not respond directly to the question, saying instead that whenever a death resulted from a police operation “there is motu propio investigation by the IAS.”

Vargas said the results of an IAS investigation would be the basis for any criminal or administrative charge against a police officer.

Read Next
A mother’s lament on Duterte’s drug war: ‘Only those in slippers are killed’