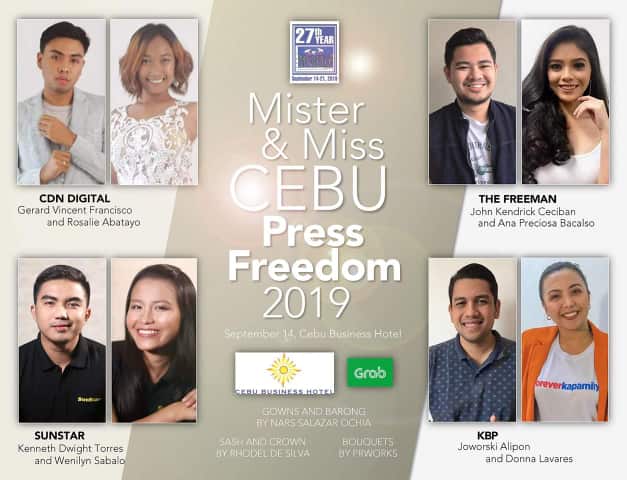 CEBU CITY, Philippines – Eight young Cebuano journalists will vie for the prestigious Mr and Ms Press Freedom titles during the coronation night that will be held later today, September 14, at the Cebu Business Hotel in downtown Cebu City.

Capitol beat reporter Rosalie Abatayo and photographer/videographer Gerard Vincent Francisco will represent Cebu Daily News Digital in the pageant, which is one of the highlights of this year’s Cebu Press Freedom Week celebration.

The tandem will be wearing the creations of award-winning choreographer and designer Lemuel Rosos and pageant shoes and accessories designed by Mark Anthony Tenchavez, the owner of Shandar.

For their opening production, Abatayo and Francisco will be wearing colorful headdresses by Val Sandiego, who is also the choreographer and stage director of the of Binibininng Cebu 2019 and the choreographer for Miss Consolacion 2019.

Other pageant candidates are Preciosa Bacalso and John Kendrick Ceciban of the The Freeman and Banat News, Wenilyn Sabalo and Kenneth Dwight Torres of Sunstar Cebu and Superbalita.  The Kapisanan ng mga Broadcaster ng Pilipinas (KPB) will be represented by ABS-CBN reporters Donna Lavares and Joworski Alipon.

The 2018 winners – Raul Constantine Tabanao of Cebu Daily News and Lorraine Mitzi Ambrad of the Freedom – will also be turning over their respective sash and crown to this year’s winners.

The Mr and Ms Press Freedom search is a prelude to the Cebu Press Freedom Week celebration that will formally open on Sunday, September 15.

The annual celebration is a gathering of tri-media workers in Cebu to celebrate the freedom of the press. | dcb