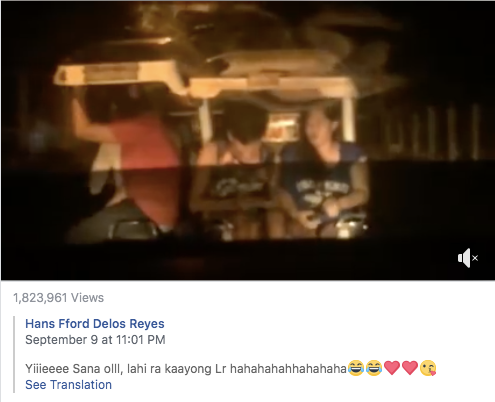 CEBU CITY, Philippines—What better way to ease the traffic than to turn a stressful situation to a lighter one.

In this video posted by Hans Fford delos Reyes, on September 9, 2019, he managed to capture a sweet moment between two passengers on board a tricycle.

“This happened at Poblacion Talisay City, last Monday, when we were going to the Poblacion Sports Complex to watch the Mayor’s Cup together with my family when we saw them (passengers),” says delos Reyes.

Upon seeing the two passengers goofing around and having fun while on board tricycle, he took the video because he found it amusing. It’s also something you don’t see often.

“I took the video of them because we were laughing in the car and we were not really expecting that the video would go viral,” he said.

Delos Reyes told CDN Digital he believes it might have been a mother and a son just playing around and easing the traffic woes that night.

“I think the girl was his mother cause she looks older to be his girlfriend,” he said.

The video which he captioned “Yiiieeee Sana olll, lahi ra kaayong Lr hahaha,” has garnered so much attention online.