Particle measurement for Cebu haze drops but still above normal 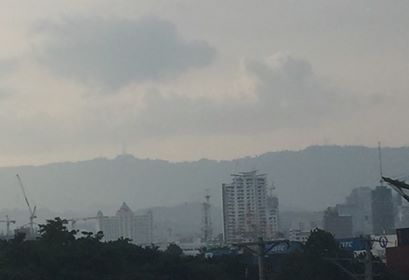 This section of the North Reclamation Area in Cebu City is enveloped by a fog-like haze in this photo taken at 4:40 p.m. on Friday, Sept. 20, 2019, from the rooftop of the Cebu Daily News Building. | CDN Digital Photo/Rosalie O. Abatayo

CEBU CITY, Philippines — The Environmental Management Bureau in Central Visayas (EMB-7) recorded a 47 microgram per normal cubic meter (ug/ncm) particulate matter in the atmosphere on Friday, which is well within the maximum average of 50 ug/ncm.

This was the advisory released by EMB-7 to the media on Friday afternoon, September 20, 2019, taken from the Continuous Particulate Matter station in Talisay City in southern Cebu.

The EMB-7 bulletin, however, said while this was well under the alarming rate, it was still at least 15 ug/ncm higher compared to the normal measurement before the haze.

With this, the agency urged the public to still take precautionary step to avoid respiratory illnesses brought about by the haze.

Open burning of garbage, leaves, and other materials are also prohibited because this adds more particles into the already hazy atmosphere.

In an previous interview, EMB-7 said they cannot predict when the haze will lift or end as this will depend on external factors, such as wind and rain.

The haze experienced in Metro Cebu and its neighboring areas since early this week has been caused by the smoke from the raging forest fire in Indonesia blown into the island’s direction and enhanced by the southwest monsoon, EMB-7  said in a September 18 advisory./elb